Big Loz's physique is looking significantly better after losing 40 kilograms (88 pounds) and this is how he did it. 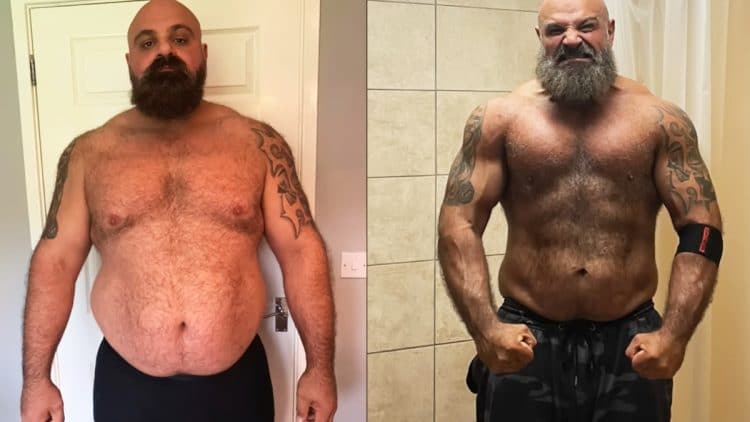 It has always been fascinating to see how much food the greatest Strongman athletes intake on a daily basis. However, most of them have to change their diet completely after retirement, as those massive meals become less suitable for their lifestyles. Laurence “Big Loz” Shahlaei faced this challenge after leaving professional Strongman and it is fair to say that he handled it quite well.

Big Loz has lost 40 kilograms (88 pounds) since he took up new diets and approaches to training. So, on June 29, 2022, Big Loz shared a video on his YouTube channel where he goes through his full day of eating. The diet played a significant role in Big Loz’s incredible transformation, as his physique is currently looking great.

Big Loz starts his day off with a light but saturating breakfast. He reveals immediately that he is lazy with regard to food, so his meals tend to be very simple. Big Loz’s breakfast consists of oats, milk, and some protein, all mixed together.

“I will do one scoop of whey protein… It makes it taste a bit nicer. It’s gonna allow it to be a little bit chocolaty, a little bit of extra protein in breakfast.”

Big Loz also added that he is allowed to eat one banana and four squares of dark chocolate a day. He sometimes also eats those during breakfast but did not do so on the day of filming.

Laurence “Big Loz” Shahlaei’s second meal was prepared the day before. So he just needed to take it out and warm it up. It consisted of rice, mince, peas, and curry powder. Big Loz also drinks a diet coke to help quench his thirst with some low-carb drinks.

The third meal of the day for Big Loz is slightly more complicated than the previous two. It consisted of some chicken, pasta, pesto, and vegetables. While cooking this meal, Big Loz gave some advice to anyone looking to improve their diet.

“Just make sure, whatever meal that you’re having, they are the meals that you like. The reason that I can stick to this is because I actually enjoy the food. I wanna make sure that my whole life is well balanced instead of just being absolutely shredded on stage.”

The fourth meal for Big Loz is very simple and light, as it is just before his workout. It has to be energizing, but at the same time cannot prevent him from training correctly. His whey protein comes after the workout, so it could be considered as a separate meal.

“This is my meal pretty much five or six time a week.”

After his dinner, Big Loz treated himself with the four squares of chocolate. Ultimately, his full day of eating came out to 3615 calories after multiple meals and some snacks.

Laurence Shahlaei’s full day of eating seems to be the perfect balance for him, as it craves all his needs, but does not contain too many calories. Big Loz has still not accomplished his goal, so his physique is set to become even better after losing a few more kilograms.