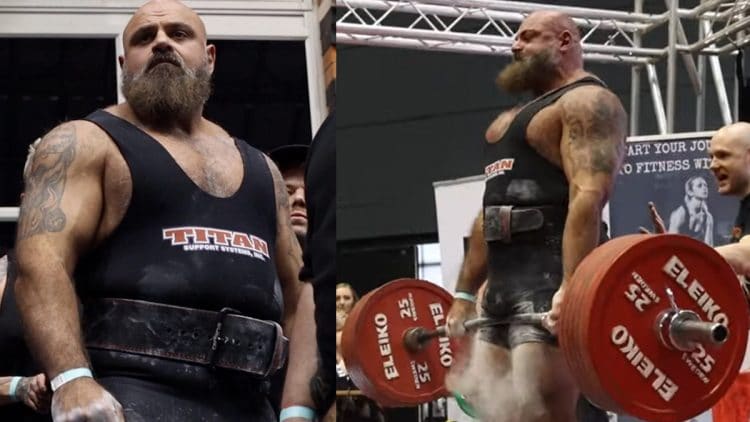 Strongman Laurence “Big Loz” Shahlaei took part in his 5th career powerlifting competition and impressed everyone with some massive lifts. He competed at the 2022 Global Powerlifting Committee (GPC-GB) Tattooed & Strong, which took place on April 9-10, at the Manchester Central Convention Complex in Manchester, UK. This was not the first powerlifting meet for the 2016 Europe’s Strongest Man, but it was the first time seeing him compete in the under 140 kg weight class.

This powerlifting meet was a push-pull format, meaning that the only events were the bench press and deadlift. With a total of 560 kg (1234.6 lbs), Big Loz tied for first place in the 140 kg weight class. He also posted a vlog from the competition, as well as a personal recap on his YouTube channel.

This is the lightest total that Big Loz has ever put up in a powerlifting meet, but he is at his lightest bodyweight in the last 10 years. This had a serious impact on his strength levels, as he weighed in at 138.5 kg (305.3 lbs), which is extremely light for him. Laurence took part in the raw division of the 2022 GBC-GB Tattooed and Strong.

“I’m trying to bring my bodyweight down, get Fitter… My biggest goal for this weekend was to make the under 140 kg weight class.”

*Big Loz’s bench press PR from a powerlifting competition stands at 227.5 kg from the 2020 GBC-GB Tattooed and Strong.

“My plan was to do 210 kg… The bench felt a bit harder than I would have liked. I got a bit of pain in my elbow, so I decided to be smart and drop it slightly.”

*Big Loz’s deadlift PR from a powerlifting competition stands at 385 kg from the 2016 GBC-GB Tattooed and Strong. However, he has pulled more in strongman contests.

“I thoroughly enjoyed it. I enjoyed being in front of the crowd again… It was great to be around some brilliant lifters, have fun, and enjoy competing again.”

Big Loz had a lot of injuries throughout his career, but an Achilles tendon tear in the 2019 WSM was the deciding moment for Big Loz to retire from competitive Strongman.

Following the 2022 GPC-GB Tattooed & Strong, Laurence “Big Loz” Shahlaei revealed that he doesn’t plan to return to Strongman again. However, he plans to do a full powerlifting meet, enrolls in an arm-wrestling match, and lose some more weight. Big Loz aims to further cut down to 125 kg (275.5 lbs) in the future.