Luke Richardson has gotten injured during Day One of the 2021 World's Strongest Man, forcing his withdrawal from the contest 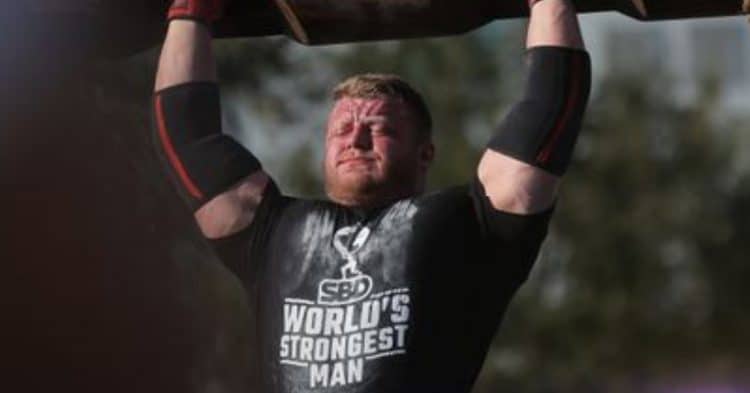 The 2021 World’s Strongest Man is underway, running from June 15th-20th, in Sacramento, California. Unfortunately it seems that an injury has forced Luke Richardson out of the contest, during Day One.

The UK is represented in a big way at this year’s WSM, and Richardson was initially to be a part of that action. Unfortunately it seems that his run at the title this year, is being cut short.

Reports began to swirl online during the events of Day One that Luke was forced out of the contest. These initial suggestions were confirmed during the World’s Strongest Man: Backstage Live! Facebook Live broadcast.

It was revealed that Luke Richardson suffered an injured bicep at some point during his run in the Loading Medley. This has sadly forced him out of the contest, taking away his shot at becoming the youngest winner of the World’s Strongest Man.

Luke was competing in Group 3 during the Qualifying rounds of the World’s Strongest Man. He was facing off against JF Caron, Robert Oberst, Mikhail Shivlyakov, and Eythor Ingolfsson Melsted.

During the Loading Medley, which ultimately led to his withdrawal, Richardson came in fourth place, earning a single point, by doing 3 objects in just under 40 seconds. With his withdrawal, the last place score in Group 3 will get 2 points, instead of the typical 1 point.

Richardson is not the first person to withdraw from the contest, as it was revealed that Graham Hicks had to withdraw because of lingering groin issues, the day before it began. Unlike Graham, who was replaced by alternate Ervin Toots, Luke’s spot will remain empty.

Luke posted to Instagram shortly after the announcement became official, to share his thoughts on the situation. Here he wrote about how disappointing this was, and thanked his fans, friends, and family for their support during this prep and competition.

“Unfortunately my @theworldsstrongestman appearance this year was pretty much over before it even started with what seems to be a distal bicep tendon rupture. Obviously gutted as I felt in a really good position to improve on last year’s performance but it was not to be this time,” Richardson wrote.

“Just a bump in what is going to be a long road but excited to test myself against a new challenge and grow closer to the athlete and person I am destined to be. Thank you all for your show of support and especially my loved ones and the guys here at WSM, you’re proper gents.”