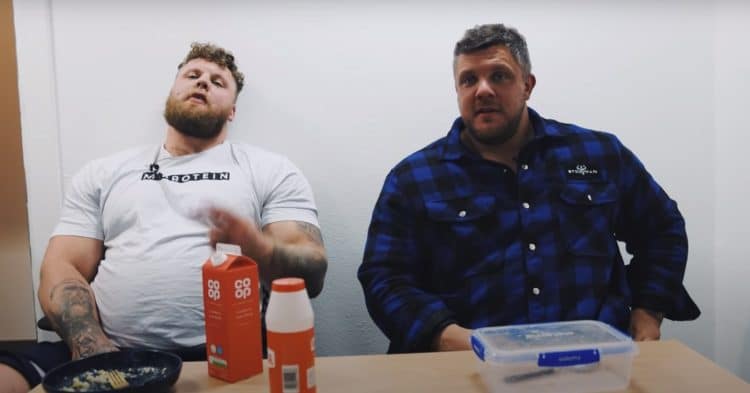 Considering their massive physiques and herculean strength, it is natural for anyone to wonder how the Stoltman brothers fulfill their dietary requirements and maintain their level of fitness. The Scottish siblings recently posted a video on their YouTube channel to share what a full day of eating looks like for them.

A full day of eating for Luke and Tom Stoltman

Luke Stoltman starts his day at 6:20 in the morning. He eats a quick meal consisting of easy carbohydrates, protein, and some fruits with black coffee before going for an early morning swim. On this day, Luke Stoltman’s meal included:

Sometimes, Luke uses vanilla or chives to add flavor to his meals. The reigning ESM is currently cutting down his caloric intake. As a result, Luke Stoltman has bid adieu to the pre-bed meal and the number of meals per day has dropped down to five from the earlier six.

Following his early morning swim, Luke meets Tom Stoltman at the Am Botham Community Cafe in Evanton, Dingwall where the siblings have the second meal of the day. However, this is Tom’s first meal and it consists of:

Luke has a similar meal but the portions vary slightly as he eats:

Tom Stoltman revealed that their new diet plan incorporates a lot of fruits and vegetables. Both siblings have faith in their dietitian and are following the instructions religiously. Despite reducing the caloric intake, Luke Stoltman states that he is feeling quite energized. He added that fatigue sinks in after a busy day of training and work. However, he prefers that over the previous high-calorie diet that made him feel quite lethargic and full all the time.

Before training, Tom Stoltman eats a pink lady apple and protein shake with three scoops of whey as his second meal of the day. Tom states that they both follow the nutrition plan from Monday to Friday and allow themselves the pleasure of a cheat meal every now and then on weekends. However, there won’t be a cheat day in the foreseeable future as leaning down is the goal right now.

The third meal of the day is very much similar to what average people eat a lot of times. However, the size of the portion separates the Stoltman brothers’ meal from an average person’s.

Luke Stoltman’s meal is similar in nutrient profile but varies slightly due to his relatively smaller frame compared to Tom. It consists of:

This is the heaviest and the most important meal of the day as both have trained extensively before this meal and feel extremely hungry.

Tom Stoltman said that he tries to reduce the amount of red meat during the off-season and shifts his focus on white meat. However, the dinner includes:

Luke Stoltman repeats his lunch protein in the dinner and eats:

Although Tom and Luke Stoltman stated that they are on a five-meal-a-day diet, they both ate four meals throughout the day. They’re expected to compete at the Arnold Strongman Classic 2022 in March and it will be interesting to see how the new diet and weight loss translates into their performance.

Courtesy of the Stoltman brothers’ YouTube channel, you can watch the full day of eating here: