Tom Stoltman breaks down the feeling of beating Brian Shaw to win the 2021 World's Strongest Man, and being the first Scottish strongman to do so 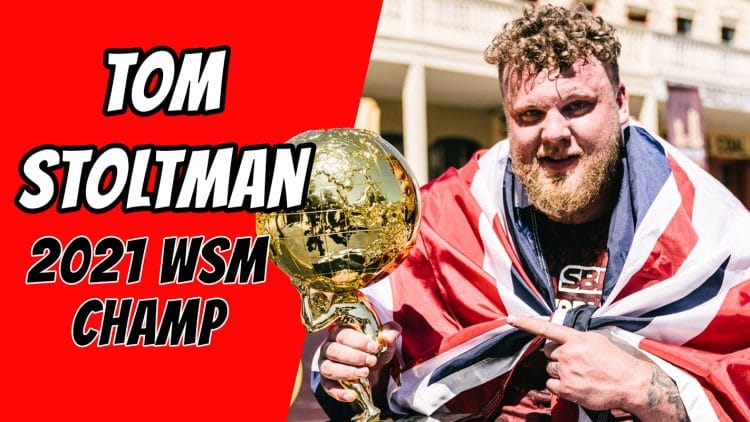 The 2021 World’s Strongest Man is in the books, and Tom Stoltman has made history to become the first ever Scottish athlete to win the contest. Now he shares what that moment was like for him, and what it means for him to reach this accomplishment.

The 2021 WSM went from June 15th-20th, in Sacramento, California. It was a contest that lasted five days, with a day to rest in between the Qualifying rounds and the two-day Finals.

When all was said and done, Tom Stoltman was victorious, being crowned the World’s Strongest Man. In doing so, he became the first Scot to earn that honor.

With this victory, Tom Stoltman did exactly what he set out to do. He told us last year, after his second place performance, that he was proud to be the first Scot on the podium, but that next year he intended on being the champ.

Speaking in an exclusive interview with Fitness Volt after his win, Tom explained how it felt for him to reach his goal. However to him, it was never something was in doubt, even if he were surprised at how quickly it happened.

“It’s still not really sunk in what I’ve achieved this weekend. But yeah, it feels good that I was able to take it over the line,” Stoltman said.

At 27 years old, Tom Stoltman was able to reach the Finals, but it was not without a fight. He had to beat Mark Felix to get through his Group and advance to the Finals, doing one of his strongest events in the Atlas Stone-Off.

However once he made it to the Finals, he took off, winning the first two events and setting the widest margin between first and second place WSM history. While Brian Shaw eventually caught up, Tom felt like it was fate that he would be able to get the better of the four-time WSM here.

“Starting off so well is where the title can be won and lost, as well. As soon as I (won the first two Finals events), my phone was going off like I’d won the World’s Strongest Man. But I won two events, this means nothing.,” Stoltman said.

“I was just there focusing on myself… There was so many good guys in the Finals, and all I needed to do was get a good lead. I knew Brian was going to battle back on the Log Lift, and luckily for me… you couldn’t ask for a better start.

“I think it was written in the stars, because a lot of people said to me, even yesterday, ‘Oh, it’s going to be you versus Brian on the Stones to win the trophy,'” Stoltman continued.

“There will always be doubts in your mind, I didn’t do very well in the log press, but looking back that was the only event that let me down, really… It’s a really good Final for myself, but Brian really pushed me in the end.”

Facing Off With Brian Shaw

Tom Stoltman kicked off the 2021 World’s Strongest Man Finals with a lead that practically nobody came close to surpassing. Nobody that is, except for Brian Shaw.

Shaw was coming into this year after a lackluster showing in 2020, and he had a chip on his shoulder, eventually closing the gap between he and Tom so much that there was only one point between them. Tom says that he was not surprised to see Brian so motivated, but he was prepared for whatever the American had to offer.

“He’s come back when people thought they were going to write him off, and they thought he was done last year, and he’s come back bigger, stronger, and better, and it was good to see Brian there. We were pushing each other and getting the best out of each other,” Stoltman said.

“It’s Brian Shaw, you don’t win four World’s Strongest Mans for nothing. Brian Shaw is so professional at what he does, he knows this sport in and out. Like I said, you can never write someone off. I’ve had bad competitions, every single athlete has had bad competitions, and I knew Brian was going to come back bigger and better this year. He was hungry for the fifth title and look what he did. He pushed us to the end.”

What This Means For Scottish Pride

When Tom Stoltman spoke last year, he explained that it was a big moment for him to be the first Scot on the WSM podium. So naturally, this feeling is expected to elevate after being the first person from Scotland to win the contest.

This is exactly the kind of emotion that Tom was feeling, moments after his victory. He said that his supporters back home, and the prospect of making history helped to propel him to victory over the course of the competition.

“It means the world to me,” Stoltman explained. “I just wanted to make history again, and to do it in the way I did is a special feeling. I’m the first guy in Scotland to do it, and everyone in Scotland is going to talk of this for a long, long time. So it’s good to put Scotland on the map now, because we’re rubbish at most sports. I mean, it’s good to be good at some sport now.”

What’s Next For Tom Stoltman?

That is the question on everybody’s minds after such an impressive performance. Of course, the first stop for Tom Stoltman is to party like it’s 1999, and celebrate this victory with his brother Luke, who also competed at the 2021 World’s Strongest Man, as well as the rest of his family and team.

However it will not be long before he gets back to competition. In fact, he has his next stop already mapped out, and it is going to be interesting to see.

“What’s next is going back home and having a big old party in the gym,” Stoltman said with a mischievous grin But in strongman, I’ve got Giants Live at the Royal Opera Hall, which is another historical event back in the UK, which I’m going to be pleased to be apart of.

“But I have to enjoy this. You’re not human if you’ve just won the biggest trophy, the biggest competition in your sport. I’m not thinking of the future just now. This is a life-changing moment for myself, my family, and everything. So I’m just going to enjoy this, soak it in, and kind of think. My name’s now in a list of greats, with the likes of Big Z, Brian Shaw, Magnus Veg Magnusson, and stuff. It’s not going to sink in for a while.”

Congratulations are in order for Tom Stoltman. His victory at the 2021 World’s Strongest Man, was incredible, and he will go down in strongman history forever.