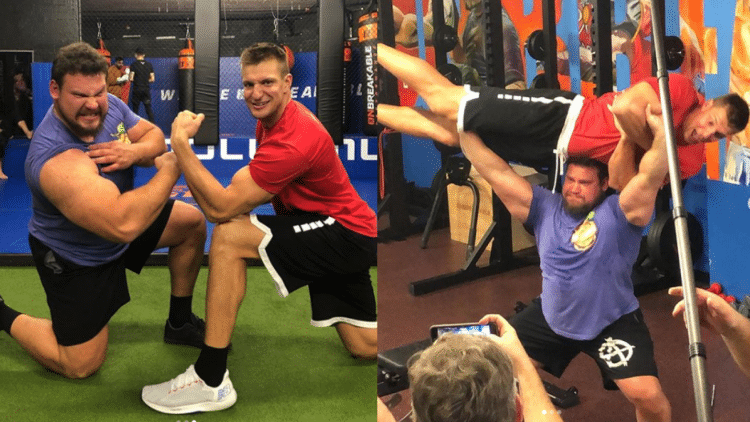 Martins Licis may already be the World’s, Strongest Man. However, he demonstrated just how strong he is, by overhead squatting Rob Gronkowski.

Licis won the 2019 World’s Strongest Man contest, proving to be an incredible athlete. Moreover, he did so by beating out some other tough competitors, like Brian Shaw, and Hafthor Bjornsson. This was his first time winning the contest, but in doing so, he established himself as one of the best strongman competitors in the world.

The rest of 2019 would see a slightly different result, as injuries would keep Licis on the sidelines for much of the year. Nevertheless, he was able to return to action a few months ago in a big way. Furthermore, he came back with some lifts that showed he had not missed a beat.

It would appear that Martins Licis is not slowing down from there, either. In a post to his Instagram, Licis can be seen lifting NFL superstar Rob Gronkowski, and doing an overhead squat. “The Gronk” as he is also known, played for the New England Patriots for his entire pro career, until he retired earlier this year. Although there is no video of the lift yet, the photos show Martins lifting the approximately 265lb man, and doing the squat.

“Overhead squatting the lord of mischief, @gronk , is no easy feat of strength. This guy’s a unit 🤯 – What an epic Day working out our rotators!”

It is worth noting that this is, by far, not the heaviest lift Licis has completed. However, when you consider how awkward it is to lift a human man, it makes sense as to why he was struggling a bit. Nevertheless, it would appear that he got through it, and enjoyed every minute of training with Gronkowski.

Martins Licis and Rob Gronkowski are certainly an unusual pair to be training together. Hopefully, they will upload a video of the full lift soon, and we can see the crazy session.

The 8 Best Lat Exercises For A Bigger, Stronger Back