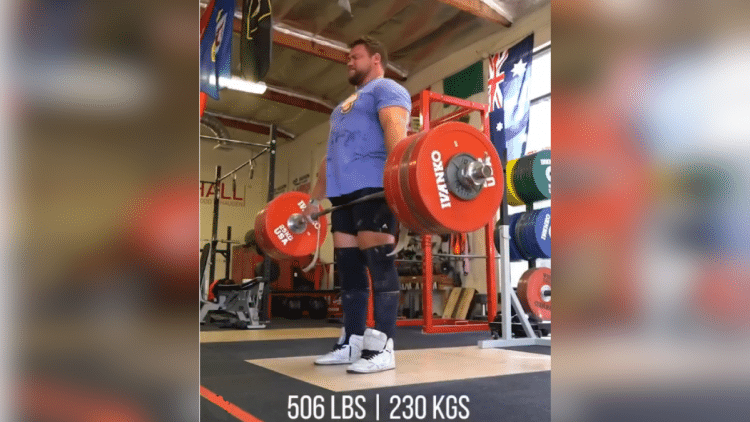 2019 World’s Strongest Man Martins Licis has been on the sidelines lately, due to an injury. However, he is getting back to action with some impressive deadlifts.

Licis is the reigning World’s Strongest Man, beating out the likes of Mateusz Kieliszkowski and Hafthor Bjornsson. However, when he was preparing to compete at the Arnold Strongman Europe, late last month. However, he was forced into a role as a referee, due to suffering an injury a few weeks out. As a result, Kieliszkowski was able to dominate the competition.

However, now it seems that Martins Licis is starting to get healed up, and back to training. In a post to his Instagram, you can see him hitting an impressive 506lb/230kg deadlift for ten reps. In the post, he talks about using these lifts as a way to rehab his injured hamstring. His stance and grip on the bar is helping relieve the pain from the injury.

“Thank you, @jerrypritchettstrongman for inspiring me to do these! – Easy work with snatch grip deadlifts. I’m using these for the next couple months to help rehab my hamstring and pinched nerve. A wide grip and a focus to keep each repetition smooth and uniform, forces me to go lighter in weight while keeping the lift challenging. I’m noticing that flexing my adductors (while keeping my knees out), completely takes away the pain in my hamstring, which goes to show it most likely is a tracking issue.”

One thing is for sure, it is good to see Licis getting back to training. He will need all the training he can get, with Mateusz Kieliszkowski hot on his tail. Kieliszkowski earned second at last year’s World’s Strongest Man competition and looked even better at the Arnold Strongman Europe. It is safe to say that when the 2020 WSM comes along, these two will put on an excellent competition.

With Martins Licis getting back to training, it will be interesting to see if he competes soon. The Arnold Strongman USA will take place at the beginning of the year, so perhaps he will make an appearance there.