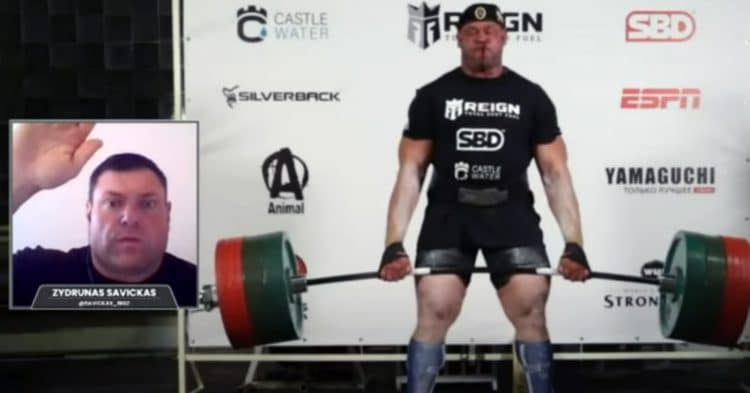 Feats of Strength series continues and tonight we had the deadlift. Rauno Heinla, Ivan Makarov were aiming to be the first human to deadlift 502kg and Mikhail Shivlyakov was aiming to break the Masters(competitors over 40 years of age) deadlift record which was set at 435kg.  Rauno and Ivan tried their best but 502kg remains to be achieved on another occasion.

Mikhail, unlike his fellow Strongman, had a great day a the office today. Mikhail is as badass as badass gets, before he ever started doing Strongman he was a Marine in Russia-hence his beret. He started doing Strongman at around 2013 and he’s been a top 10 Strongman ever since. He is best known for exactly 3 things; 1. Wearing a beret, 2. Always smiling 3. Bleeding like Mike Tyson punched him square in the face every single time he goes for a heavy deadlift.

Now, as you can see in the Instagram video above-he checked all three boxes while breaking a record. The deadlift attempt was observed under the judging eye of Strongman legend “Big Z”.  As soon as Big Z gave the “lift” signal Misha, as he is often called by fellow Strongman friends, started the epic battle against the loaded bar.

The weight went off the floor but that’s when the trouble and the nose bleeds started. Shivlyakov started shaking under the immense pressure of the insane weight but the former Marine wasn’t known for giving up a fight and he sure as hell wasn’t going to start such a trend. So he did what he had to do, he pulled and he pulled and he pulled. The bar starts going down but he hitches it back up to a very, shaky lockout.  The Zoom judge, the legendary Big Z, wasn’t impressed and waited until Mikhail had the bar in a total lockout and control before telling Mikhail “good lift” and finally letting him drop the bar back down.

As he dropped the bar, he whipped the horror scene that was happening on his face, flashed a happy smile, and celebrated with his entire hype crew. In a post-lift interview, he said he is aiming to place in the top 3 at this year’s WSM. Which, could very likely happen since two of the previous champions(Thor and Licis), and favorites, aren’t competing. On the other hand, among many people who are competing are 4x WSM Brian Shaw(who is laser-focused on taking home the 5th title) Mateusz Kieliszkowski, and the Stoltman Brothers. Each one is more than capable of spoiling Mikhail’s plans and squeezing him out of the top 3.