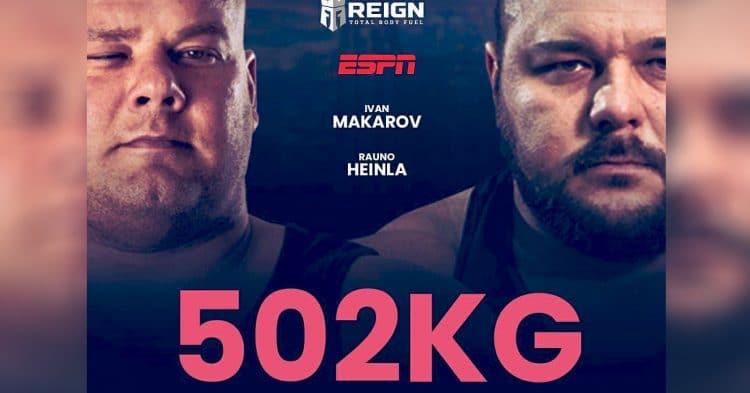 Season two of the World’s Ultimate Feats of Strength series was nothing short of impressive as many of the world’s top strength athletes set new world records. Last weekend, Luke Stoltman of the UK broke the British log lift world record with 221kg. As part of the same event, Rob Kearney of the US attempted to break the American log lift world record (his own record) with 220kg/485 lbs, but unfortunately, tore his tricep during the lift and was unsuccessful.

Fast forward to earlier today and WUS concluded season two of the Feats of Strength Series where Strongman elites Rauno Heinla (Estonia) and Ivan Makarov (Russia) went head-to-head in the deadlift. They were also up against Hafthor “Thor” Bjornsson’s 501kg/1104 lbs deadlift world record; a feat that he achieved in season one, episode one of the World’s Ultimate Strongman Feats of Strength Series.

Last month, Heinla broke the 400kg/882lb Deadlift for reps record with 6 reps as part of the Feats of Strength Series. Then you have Makarov who deadlifted 490kg in preparation for the world record.

Related: Ivan Makarov – “I want To Set A World Deadlift Record And Win The WSM!” (EXCLUSIVE)

They had their sights set on 502kg/1107 lbs but that’s no easy feat even if it is only 1kg above Thor’s record.

On the other side, Russia’s Mikhail Shivlyakov was determined to break the Master’s over 40 deadlift world record, and although he wasn’t attempting the all-time world record like the other two; successfully locking out 436kg/962 lbs in his category wasn’t any more of a certainty. Not to mention, he failed the Master’s world record attempt in season one.

As usual, Laurence Shahlaei and Mark Boyd were in charge of the commentary while Zydrunas Savickas was the head ref. But unlike previous episodes, Hafthor Bjornsson joined in on the commentary seeing as two men were attempting to break his world record.

So both Heinla and Makarov started off with 375kg/826 lbs and you could imagine, it was no big deal for these behemoths.

Makarov then successfully pulled 450kg/992 lbs as he built up to the world record attempt, although, Heinla chose to stay a bit more conservative with his choice of weight.

Makarov was up again but this time for the all-time deadlift world record of 502kg/1107 lbs. Big Z gave him the go-ahead and the pressure was on, but, unfortunately, he could not get the bar above his knees, although he gave his best effort.

Heinla chose to stick with 455kg/1003 lbs and it was enough to get him the head-to-head win against Makarov. He would not attempt the 502kg/1107 lbs world record.

Lastly, Mikhail Shivlyakov was up for the Master’s word record of 436kg/962 lbs, and it was one of the craziest attempts you’ll ever see. He fought harder than anyone could, shaking uncontrollably in an attempt to lock out his knees, and despite blood pouring out of his face, he prevailed to get the word record.

While Bjornsson’s deadlift world record was not broken today, these elite competitors will be back at some point, and maybe we’ll see a new record. But all-in-all, a good showing for the season finale, and at least one world record was broken!

We’ve provided time stamps for each attempt below.