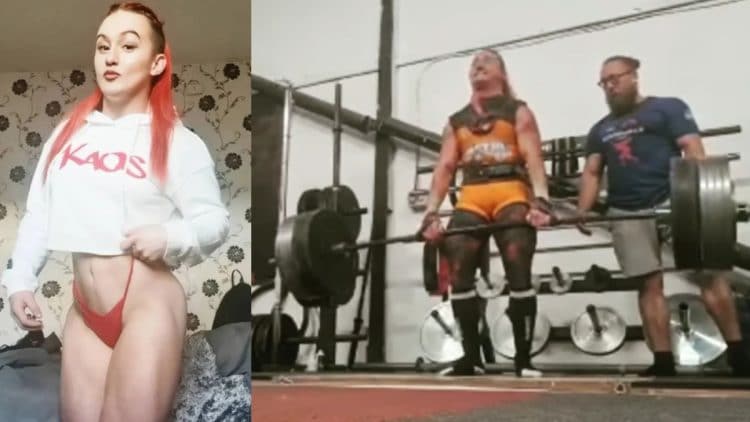 Rhianon Lovelace is once again displaying her greatest attribute, which is the deadlift. She has been breaking World Records almost every time she grips the bar, regardless of the variations. Rhianon continued with her record-breaking performances, as she unofficially broke the World Record by pulling 280 kilograms (617.3 pounds).

Although the registers for Strongman and Strongwoman World Records can be a bit confusing, it seems that Rhianon Lovelace also holds the current World Record. She set it by deadlifting 272.5 kilograms (600 pounds) at the 2020 Strength Shop Record Breakers. So, Rhianon has now pulled 7.5 kilograms (17 pounds) more than the official record.

Rhianon Lovelace used a deadlift suit, lifting straps, and a lifting belt to aid her in the lift. All are perfectly legal in the sport of Strongwoman. Rhianon is now set to appear at the 2022 Berkshire’s Strongest, which will take place on July 16. She will not be a standard competitor, but will instead attempt to break the deadlift World Record.

“This is the number that means such an awful lot to me, (obviously aside from the 300) because when we make this Legit in Comp, I’ll have added exactly 100kg to the World Record since I first broke it in 2017❤️.”

Rhianon Lovelace has been suffering from pneumonia for the past few weeks, which also forced her to withdraw from her Axle Deadlift World Record attempt. So although pneumonia limited her lung capacity, Rhianon Lovelace built a gigantic deadlift and is now ready to make it official.

Rhianon Lovelace is living her life to the fullest and is trying to become as effective, focused, and determined as possible. These attributes helped her achieve greatness multiple times throughout her career.

Rhianon Lovelace began her career as a powerlifter and, at the age of just 18, won the WPC World Championship. Rhianon is also the first British woman to squat 3x her bodyweight. She then moved on to Strongwoman and built an even greater career.

As a Strongwoman, Rhianon Lovelace has claimed multiple World Records, and is currently the greatest athlete in the 64-kilogram weight class. Some of her greatest achievements are winning the 2018 U64KG World’s Strongest Woman, and was even pronounced as the pound-for-pound strongest woman in the world, after winning Eddie Hall’s challenge.

Rhianon Lovelace will undoubtedly make the deadlift World Record official in the next few weeks. Maybe she will pull even more than 280 kilograms (617.3 pounds), but nonetheless, it will mark a very impressive milestone.