Taking a trip down memory lane, Cutler reflects on seeing Lee Priest at 21 years old, 'He Was Massive and Unbelievable' 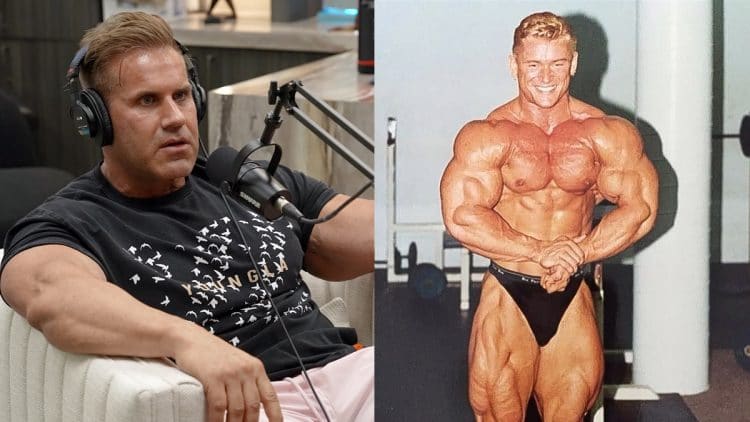 Jay Cutler is one of the most well-respected voices in the bodybuilding industry and left the sport with four Mr. Olympia titles. In a recent discussion with retired 212 Pro Flex Lewis, Cutler discussed Lee Priest’s freaky muscularity and ‘unbelievable’ physique at just 21 years old.

Cutler amassed popularity during his bodybuilding tenure with an incredible lower body and detailed conditioning. While participating in the Men’s Open category, Cutler ascended to incredible heights as an IFBB Pro. He captured the most coveted trophy in bodybuilding after winning the Mr. Olympia contest a total of four times.

Jay Cutler made his mark on the sport in the company of Ronnie Coleman, an athlete who shares the distinction of winning the most Olympia titles at eight, a feat that has only been accomplished by one other man in the sport, Lee Haney. Eventually, Cutler dethroned Coleman in 2006. When Cutler was younger though, he remembered a time in which Lee Priest came to Gold’s Gym in Venice Beach where he was taken aback by the Australian native’s muscularity and overall size.

A career that took place from the 1980s to the 2000s, Priest was a sight to behold on his way up the sport’s ladder. Known for having some of the best arms in the game, Priest was an imposing force anytime he graced a bodybuilding stage. Unlike many athletes before him, Priest managed to leave the sport on top. He earned arguably the biggest win of his career in 2006 at the Iron Man Pro and followed that up with a victory at the 2006 NOC New York. Before calling it a career, Priest also took gold at the 2013 NABBA Mr. Universe competition.

Jay Cutler on Lee Priest’s Size During Prime Years: “He Could Barely Walk His Legs Were So Big”

“I got to mingle with a lot of the top pros. Lee Priest was just coming on the scene at that time. I know you guys kind of had this little rivalry because who’s better… dude he was unbelievable. No lie. I’ve seen Ronnie Coleman, I’ve obviously competed with him. Nobody can ever blow your mind like Lee Priest looked when he was 21 years old.

I walked in the gym and I remember looking at him and saying, ‘how is that even possible?’ He could barely walk his legs were so big. I think he downsized as his career went on but he was massive.” Cutler told Lewis.

Weighing around 260-pounds in competition, Cutler was extremely impressed by Priest’s physique. According to the bodybuilding legend, he questioned how it was even possible for Priest to look the way he did.

“260 [pounds] but he wasn’t fat. You know he’s shorter, but he was unbelievable. I remember Ed Raven, ‘you gotta see this kid’. I’m thinking gosh this guy is a year older than me, how is this possible.

I got to see Erin Baker who looked unbelievable, obviously [Chris Cormier] and Flex Wheeler was mind boggling at that time because he got his Pro card a year prior.”

In addition to Priest, the four-time Mr. Olympia appreciated how mind-boggling the builds of Chris Cormier and Flex Wheeler were.

After seeing Priest at a young age as well as six-time Mr. Olympia Dorian Yates‘ picture up on the wall at the famous Gold’s Gym, Cutler knew that he wanted to pursue a career in bodybuilding.

“Walking in the gym and pulling up in expensive cars, I was like ‘I need to bodybuild’. I remember seeing Dorian Yates on the wall at the time, it only went to Dorian Yates because he was Mr. Olympia at the time. I said, ‘man if I could ever, that would be amazing if I could get my picture up there.’

It meant something then. Like a magazine cover, if you’re on the wall of Gold’s Gym Venice, that’s like the Hall of Fame. But you were very elite. It went [Lee] Haney, Yates, that’s all. There was no Ronnie Coleman yet. All these guys right. I was just floored by the Gold’s Gym atmosphere.”

As of late, Priest was inducted into the Muscle Beach Hall of Fame, in Venice. While Priest never won a Sandow trophy, he managed to compete on the Olympia stage a number of times.

RELATED: Lee Priest Reflects on the Death of Cedric McMillan: ‘People Can Speculate, But We Really Don’t Know What the Cause Was’

Similar to Yates, Cutler reached the top of the sport with shocking size and conditioning. Clearly, even before competing in the sport, the four-time Mr. Olympia was influenced by Lee Priest and his unbelievable physique at 21. Cutler celebrated the fact that Priest was able to hang with other top athletes in the sport despite sporting a shorter stature.