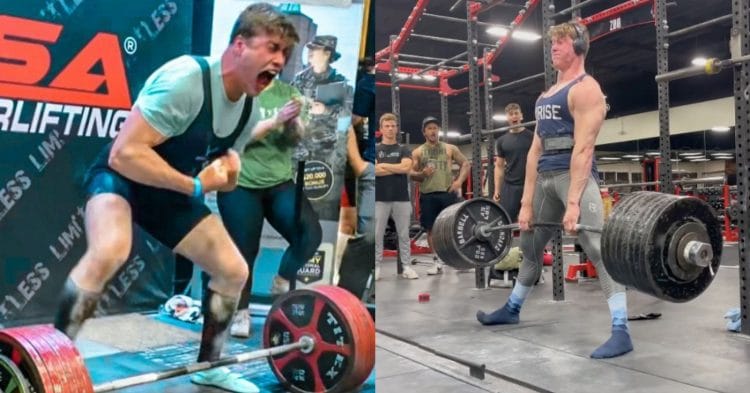 It is practically unheard of for a teenager to be able to deadlift over 800lb. However 19 year old Sawyer Klatt did just that, securing an official world record in the process.

Competing in the 105kg weight division, Klatt has just two meets under his belt. The first of which came in 2019, when he won the Lake Superior Open at just 17 years of age.

Then, about a month ago, he competed in the USA Powerlifting (USAPL) Mayhem Classic. He was able to win this contest again, completing the following three lifts, after going 9/9 overall:

Not long after the strong showing from this young teenager, Sawyer Klatt was back at it again, this time putting up impressive numbers in the training room. One of these performances was captured on video, and uploaded to Instagram.

In the video, we can see the prospect deadlift a whopping 800.9lb (363.3kg), which would be a new Junior world record, had it taken place in IPF competition. This surpassed the current record by a staggering 3.3kg.

To be clear, Klatt does not reveal the current weight that he is walking around in, at the time of this deadlift. However with it happening just four days out from his last contest, it is hard to imagine that he was too much heavier than the 105kg he competes at.

As it stands currently, the IPF is the only powerlifting organization that recognized 105kg junior records. That number, for the deadlift, currently sits at 793.7lb (360kg), set by Sweden’s Emil Norling in 2019.

Had this been in competition, Klatt would have walked away with the new record for this weight class, solidifying his place as a top prospect in the sport. You can check out the highlights from his last competition below.

At the end of the day, Sawyer Klatt has just added himself to the list of young teenage powerlifters that are worth watching develop. This performance made him immediately go from a good, talented athlete, to a legitimate threat to world records for a while to come.

It will be interesting to see where he decides to compete next, and if he is able to officially hit this record in competition. In the meantime though, he continues to amaze onlookers with his work in the training room.