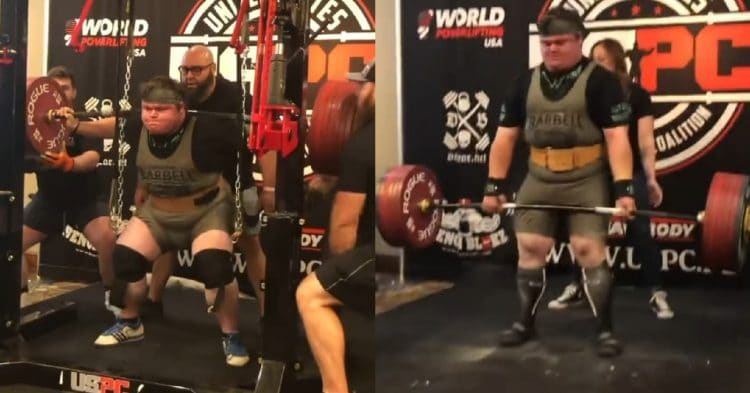 The powerlifting world has been abuzz when it comes to tracking the career trajectory of young Jackson Powell. He took another massive leap towards greatness with a recent meet over the weekend.

At just 18 years of age, Powell has earned a reputation as arguably the most promising young powerlifter in the world today. Competing as a super heavyweight, the teenager has some insane strength that he plans on using to reach some major goals.

Not least of these is the attempt to become the first teenager to hit a 1000kg (2204.6lb) total in competition, as he explained when speaking to Fitness Volt last April. Over the last several months, he has continued to make progress towards that goal, showing exponential improvements.

Jackson Powell had plans to make substantial gains in that regard, when competed at the World Powerlifting USA (WPUSA) Tennessee State Championships over the weekend. While he may not have done as well as he would have hoped, he had a strong enough showing to score a win.

Below is a recap of Jackson’s performance at the WPUSA Tennessee States Championships, performed raw with wraps. Additionally, we have included video of his performances, courtesy of his Instagram page.

“Definitely didn’t do what I planned on today but still came out with a small total PR,” Powell wrote on Instagram.

“Thanks to my coach @the_walls_of_jericho_training for everything today and all the people who came out and supported. Couldn’t have done it without my team and family today. Till the next one”

While Powell seems to be hard on his performance here because he did not reach his planned, there is absolutely no reason to be disappointed. Aside from a PR with that total, as well as competition bests for all three lifts, this was also the third heaviest total in Teen 18-19 division history.

He is inching closer to some world records too, some of which he attempted at this meet. He attempted a 440kg (970kg) squat for his second and third attempt, which would have been a new world record by 14.5kg, and came up 15.5kg shy of the world record total for the division.

It is probably safe to say that this was not the best performance that Jackson Powell could have given, and that is coming from his own thoughts on the matter. With that said, the fact that he can have this type of performance on a bad day is something incredible to see.