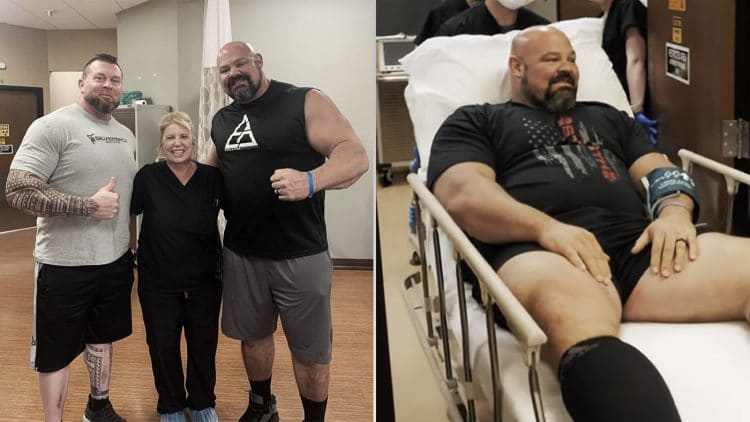 Four-time WSM champion Brian Shaw suffered a hamstring injury during the inaugural strongman contest at the 2021 Rogue Invitational. The injury sustained in the elephant bar deadlift event forced Shaw to pull out of that event. The 39-year-old could not actually participate in the Inver Stone event as a result and only touched the stones ceremoniously. Shaw got a huge round of applause and cheers from the fans in attendance. However, the injury led him to an overall seventh rank in the competition.

Fellow strongman Jerry Pritchett advised Shaw to get a Platelet-Rich Plasma (PRP) treatment. Pritchett used the same treatment to heal the nerve damage sustained due to an injury at the 2021 WSM contest.

PRP treatments use the injections of concentration of a patient’s own platelets to accelerate the healing of muscles, ligaments, tendons, and joints. This way, the process uses the patient’s own healing system to solve musculoskeletal problems. However, in Brian Shaw’s case, the process was a little different. It involved removing the A2M molecules from the blood and injecting it into his body along with platelets to help with the healing.

With the help of Jerri Pritchett, Brian Shaw received the treatment at the Active Life Physical Medicine and Pain Center in Surprise, Arizona. They met Dr. Wendi Lundquist, the founder and medical director of the facility, and proceeded with the treatment.

The first step of the treatment involved extracting 120cc of Brian Shaw’s blood. A centrifuge machine spun the blood for about one and a half minutes at 38rpm to separate and remove platelets from it. Brian Shaw revealed that he stayed super hydrated leading up to the procedure to ease the process of removing the blood needed for the process. The purpose of this entire process was to remove Alpha 2 Macroglobulin (A2M) and platelets from Brian Shaw’s blood to inject into his body.

While explaining the further procedure in detail, Dr. Lundquist explained that platelets have growth factors in them that stimulate the stem cells to heal and create new tissue. Platelets separated from Brian Shaw’s blood were frozen to make them more active. A2M molecules, the second component separated from the blood, were filtered, concentrated, and added back to platelets. The role of A2M molecules in the treatment as explained by Dr. Lundquist:

“(A2M molecules) eat up anything that’s not supposed to be there, like if you had arthritis – In this case, it’ll be more just like proteases, which cause inflammation. So it aids in healing by cleaning up. Like little pacmans, it cleans up things that aren’t supposed to be there.”

Doctors then went on to perform ultrasound imaging of Brian Shaw’s hamstring to identify the exact location of the tear. Shaw received an epidural to numb his legs and the doctors injected the gel formed with the combination of platelets and A2M with thrombin into the affected area. Shaw revealed that apart from the recent hamstring injury, he suffered a terrible injury in his left hamstring back in 2019 and received treatment for both.

Dr. Lundquist expects Brian Shaw to see significant improvement over the course of the year. She stated that many procedures help with reducing inflammation but do not provide lifelong healing when performed. Explaining further on how the A2M injection will aid healing, Dr. Lundquist said:

“It (the mix of platelets, A2M and Thrombin) actually attached to the tendon and creates more of a stronger bridge. If there are any tears, it’ll help that heal a little better and it’ll stay put in that area. So over time – it takes a little while for healing anything natural just takes a while. But hopefully you’ll start noticing the difference in maybe like, six weeks. (For) some people it’s a little sooner, (for) most people it’s kind of this ongoing incremental improvement over time.”

Brian Shaw remained in the facility until he regained movement in his legs and stated that the process was successful.

The 2022 WSM contest is expected to take place in August 2022. Shaw finished second at the 2021 WSM contest. If the treatment shows desired results, it is very likely that the four-time WSM winner will have a great showing in 2022. Will the four-time WSM score the record-tying fifth win in 2022? Let us know what you think.

Courtesy of Brian Shaw’s YouTube channel, you can watch the entire treatment here:

Average Biceps Size: How Do You Measure Up?