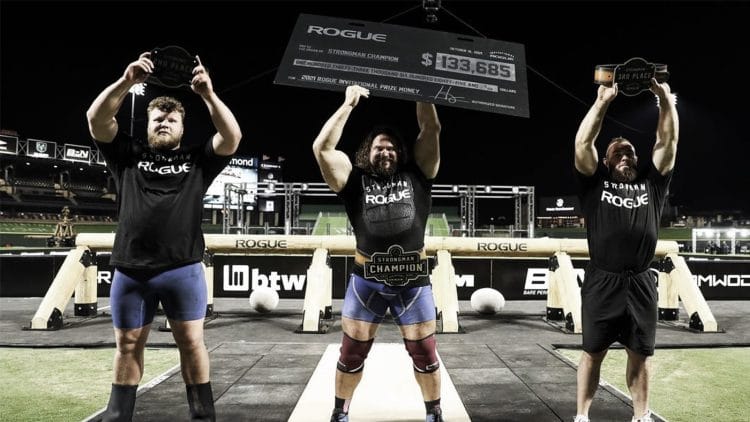 Martins Licis has dealt with several injuries in recent times including a car accident that forced him out of competition. He last competed at the 2020 Arnold Strongman Classic and made a statement in his comeback at the 2021 Rogue Invitational. Some of the most elite athletes in the sport competed in the Dell Diamond stadium for the highest ever prize money in the strongman history and here are the final results of the clash:

Athletes competing at the event walked away with a minimum purse of $3,938 from the $1,436,638 prize pool and here is the list of prize money earned by all three podium finishers.

The event aimed at determining maximum weight. Canadian strongman JF Caron won the event with 420kg (926lbs). Tom Stoltman claimed the second spot with 413kg (911lbs) and Martins Licis came up third with 410kg (906lbs). The order of deadlifts was based on the weight every strongman chose so that the competitors could finish all the reps before the next competitor attempted.

Brian Shaw suffered a hamstring injury during his second lift and had to forsake the third attempt. However, this did not stop the four-time WSM from claiming the fourth spot at the event.

Athletes lifted five dumbbells overhead that weighed 253, 274, 280, 290, and 300lbs. two-and-a-half minutes being the time cap for the event, the person to do it in the shortest time was determined as the winner.

Oleksii Novikov, who finished all the lifts in 65 seconds, earned the first spot at CYR Bell Ladder. He was the only competitor at the event who completed all five lifts within the time limit. Martins Licis and Mateusz Kieliszkowski came a distant second and third with three lifts in 37 seconds and one minute, respectively.

Event 3 – The Wheel of Pain

Inspired by the wheel that Arnold Schwarzenegger pushed in the movie Conan The Barbarian, Wheel of pain is the event made famous in the Arnold Strongman Classic. The competitors were expected to turn the 20,000lbs wheel as far as possible within one minute. The winner is determined by the distance covered at the end of one minute.

2021 WSM Tom Stoltman won the event despite never having participated before. Stoltman pushed the wheel to a distance of 89ft-3in. Martins Licis came a close second with 85ft-6in.

Participating athletes had to carry the 455kg (1000lbs) timber yoke to 50ft and press 163kg (360lbs) log overhead for three reps. After starting behind a start line, athletes had to get in the position to pick up the yoke after the horn rang. The winner was determined by the fastest finish time.

Mateusz Kieliszkowski won the event with 41.74 sec time while Martins Licis (44.70 sec) and Tom Stoltman (52.06 sec) occupied the second and third spot, respectively. However, Licis had an overall lead over Tom Stoltman heading into this event. The ~6 second lead over the 2021 WSM in the yoke carry and overhead log lift medley allowed Licis to maintain the lead over Stoltman heading into the final event Stone over hitching post.

Unlike the perfect spherical atlas stones used in the strongman competition, Inver stones are irregular in shape. The athletes were required to lift five stones weighing 275, 300, 365, 400, and 420lbs over a 50in high log. Two minutes was the time cap for athletes to attempt the feat.

Martins Licis had to secure second place or higher in this event to maintain the overall lead and win the competition. Tom Stoltman is known as ‘The King of Stones’ due to his track record at this event. However, Martins Licis trained strategically to prepare for his comeback and practiced one-motions extensively during his training. The strategy worked perfectly as Licis bested Stoltman to win the first spot at the event. Licis lifted all five Inver stones in 24.45 seconds to claim the first spot.

Due to the hamstring injury suffered during the elephant bar deadlift event, Brian Shaw did not attempt the lift and only touched the stone ceremoniously. However, Shaw received a big round of applause and chants of his name from the audience in attendance following his address.

No Frills Fitness: One Kettlebell and Bodyweight Full-Body Workout