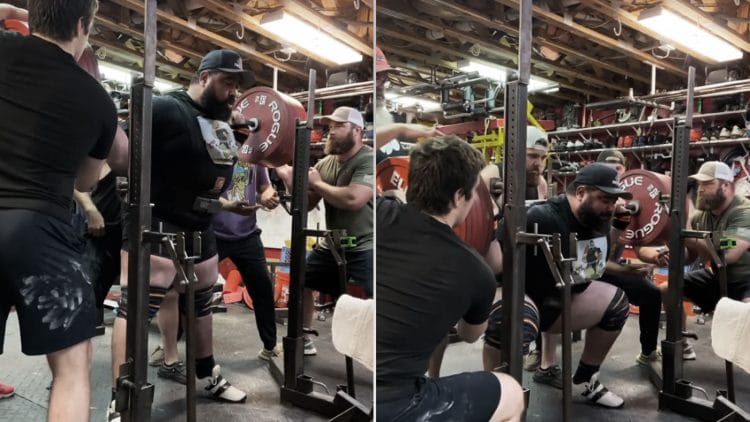 Hassanin lifted 455kg (1003.1lbs) equipped double in the first video uploaded on his Instagram account on October 11th. The Super Heavyweight took a 35kg (77lbs) leap in the next video uploaded on October 19 and squatted a staggering 490kg (1080lbs). He wore knee wraps, lifting belts, and wrist wraps in both videos. To put the Goliathan task in perspective, Hassanin required five spotters while performing the lift.

Hassanin’s body weight at the time of these lifts is unknown. However, he weighed in at 181.1kg (399.3lbs) in his last competitive appearance at the 2021 USA Powerlifting (USAPL) Equipped Nationals in June 2021. This puts Ahmed Hassanin’s 490kg (1080lbs) squat at 2.7 times his competition body weight. The lift falls in the range of heaviest squats of all time. However, since the 35-year-old completed it out of competition, it will not be counted among the official world records.

So far, Blaine Sumner is also the only athlete in the +120-kg weight class to squat more than 500kg. Tyler Butcher and Dustin Slepicka have both squatted an exact 500kg (1102.3lbs) in the weight class. Sumner has won three out of the eight IPF competitions that he has participated in. He finished as a close second on three other occasions.

Ahmed Hassanin has to bridge the 15kg (33lbs) gap to set a new record in the +120kg weight class. The 2021 International Powerlifting Federation (IPF) World Open Championships are scheduled to take place in Vilnius, Lithuania from today, October 21st to October 31st.

Ahmed Hassanin finished second in the 2021 USAPL equipped nationals where he last competed and lifted a total of 1080kg (2381lbs) in the effort. Looking at Hassanin’s progress, creating a new world record does not seem out of the realm of reality. However, it will be interesting to see if Blaine Sumner’s record will be standing when the competition comes to an end on October 31st.

Chad Penson recently posted a massive squat from training, which made it clear that he would also perform amazingly at...