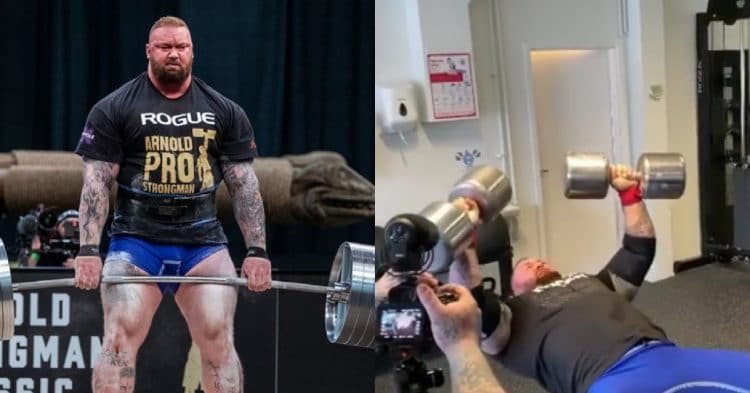 Thor Bjornsson  has been looking unstoppable in his recent gym sessions. This continued again recently, when he both a personal reference with an insane incline dumbbell press set.

Bjornsson had one of the best performances of his strongman career at the 2020 Arnold Strongman Classic. Here, he captured his third straight title. Not only that, but he did so while looking dominant the whole way.

Following that competition, a lot of things have changed in the world. However one thing that is still the same, is the fact that Bjornsson is still looking to improve. This was perhaps most evident with a recent Instagram post. The video shows Thor striking down a personal record, but hitting a 220lb incline dumbbell press for a whopping 7 reps.

“PR 100kg/220lbs for 7 reps. I was aiming for 8 reps but I lost my balance before doing my first reps and that took a lot of energy out of me! Still happy with a Personal Record! 💪💪”

As Bjornsson says in the post, he was going for eight reps but lost balance and could not quite complete that. Regardless, he was able to score the new record all the same. It still makes you wonder though, just how he would have looked if he had not had his energy zapped like that.

Thor seems to be going back to the basics, in terms of his training. He was even seen recently working on his atlas stone training for the first time since the 2019 World’s Strongest Man. He still had most of his strength though, hoisting the 270kg stone in one motion. Take a look:

Through it all, Thor Bjornsson never ceases to amaze fans. For someone who has been in the game as long as he has, to continue pushing the limits of his strength, is simply impressive to see.