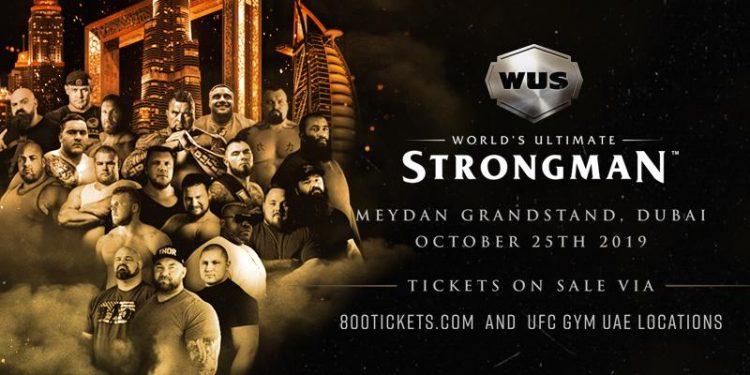 Strongman as a sport is growing FAST. Giants Live is filling in stadiums all over the UK and is looking to spread out to the US and the rest of Europe, Arnold Strongman Classic is as big as it ever was and it’s showing no signs of slowing down and now a new player has entered Strongman promotion. World’s Ultimate Strongman Dubai last year made some waves as they wanted to bring in the biggest names in Strongman and create the best Strongman event in the world. The event is promoted as a larger than life sport mixed with a carnivalesque spectacle. Here’s a small excerpt from the WUS website that gives a glimpse into the promised spectacle.

We’ll take you from your hotel to the event, where you’ll watch the biggest strongman event in the world. While you’re there, you’ll have access to a 5* brunch with unlimited food and drinks, including alcohol. Then you can experience the thrill of victory with our athlete meet and greet straight after the prize giving ceremony. And when it’s over, we’ll take you back to the hotel where you can relax and unwind… …or you can join the exclusive after party.

That’s just day 3 of a 4-day event, so yeah…very ambitious and very interesting.  Last year’s and this year’s “WUS” contestants were chosen via “invitation only” principle and the guys were pretty much the biggest names in Strongman; Martins, Thor, Iron Biby, Shaw…etc. However, for next year, things get a bit more complex as the qualification system has been broadened by a significantly large number.

Future “WUS” contestants will come from the following Strongman events;

The top 15 from World’s Ultimate Strongman

The winner of the Strongman Champions League series (Global)

The winner of the Official Strongman Games

This is a LOT of events and potentially a LOT of Strongman, but take a closer look at the list. Some of the qualifiers will no doubt overlap from various other events. For instance, I can with 100% certainty say that the guys from Arnold Strongman Classic will overlap with the top 3 placing guys in the WSM.

If I am understanding the list correctly and the “Giants Live Europe” is referring to “Europe’s Strongest Man” event, then expect that the top 3 guys from there to either partially or totally overlap with the two above contests as well.  Of course, a lot of new names will emerge from the other events like the Strongman Games, upcoming Gulf’s Strongest Man…etc.

This has a lot of potentials, and the implications and comments coming from the Strongman community are that WUS will probably resemble a Crossfit Games type of Strongman contest with a scoring system that won’t allow guys to have a nagging weak spot.

Me, personally, I am curious to see the logistics of accommodating and feeding that amount of large men. Last year’s athletes have nothing but praise for WUS accommodation, treatment and prize money but if these qualifiers don’t get dialed down by next year’s event- things could potentially get crowded.

Also, this is purely me speculating, but I’m guessing guys like Larry Wheels could also get a special “wild card” invite to the event. Regardless of them not being in one or more of the needed qualifiers.

2020 CrossFit Open: Complete Guide To Everything You Need To Know