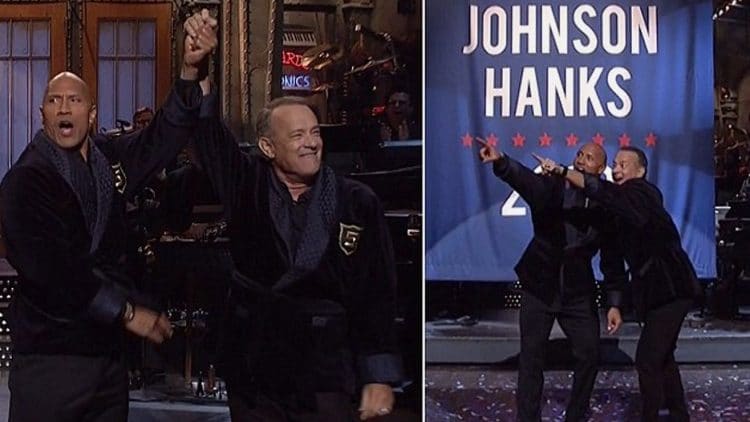 Dwayne ‘The Rock’ Johnson, says he is running for president in 2020 as he hosted the finale of Saturday Night Live – and he wants Tom Hanks to be his running mate.

The former wrestler turned blockbuster film actor, could possibly turn commander-in-chief in a matter of years as he echoed his bid for president on SNL. 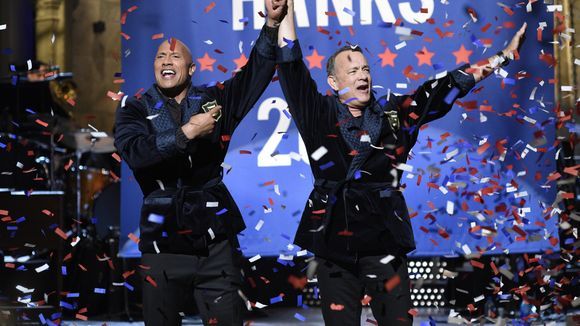 During the season finale of SNL, Johnson came to the stage and opened the show, before Alec Baldwin presented with an honorary robe for hosting a total of five times.

Johnson, who continues to entertain the possibility of challenging President Donald Trump for the White House in 2020, then jokingly welcomed his ‘running mate’ Tom Hanks to the stage.

Alec Baldwin, who assumed his Trump duties during the opening of the sketch show’s season finale, welcomed The Rock to the Five-Timers Club, which along with prestige, means you get a smoking jacket with quilted lapels bearing a golden “5” on the chest.

The Rock mentioned to his fellow club member that people have been asking him to run for POTUS, and he is obliging. “Starting tonight, I am running for the president of the United States,” he told an audience excited about his “announcement.”

“And I’ve got to tell you, I’ve already chosen my running mate,” he continued. “He’s also in the Five-Timers Club, and like me, he’s very well-liked. He’s charming, universally adored by pretty much every human alive.”

Crushing Baldwin’s hopes that he would be The Rock’s choice for veep, the Baywatch star announced he’s selected, Tom Hanks. “Dwayne, I could not possibly turn this down,” Hanks said. “I’m in. Let’s go.”

“Now, in the past, I never would’ve considered running for president,” The Rock confessed to the audience. “I mean, I didn’t think I was qualified at all, but now I’m actually worried that I’m too qualified.”

“Well, the truth is, America needs us,” The Circle star assured him. “No one can seem to agree on anything anymore except for two things.”

“Pizza and us,” The Rock said, finishing Hanks’ thought and evoking all of the feels that we got from besties, Barack Obama and Joe Biden. 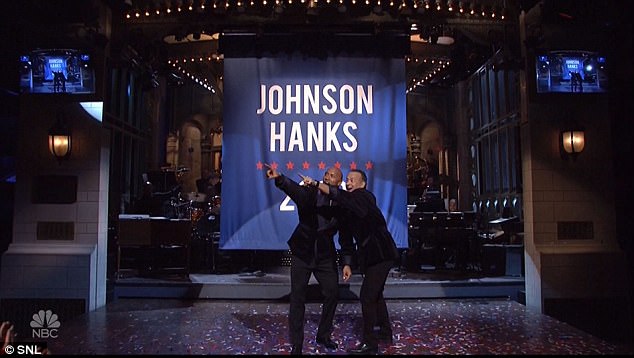 The Rock then admitted that he and his running mate — whom he calls “Hanksy” — were only joking about putting their name on the ticket. “It’s just that when it comes to politics, we need more poise and less noise,” he reasoned. “Americans deserve strong, capable leaders. Leaders who care about this country and care about its people.”

“Dwayne, that kind of sounds like you and me. I guess we got to do it,” Hanks said before asking production to drop a banner that read “Johnson Hanks 2020.”

Be Inspired By This Cancer Patient’s Incredible Fitness Transformation