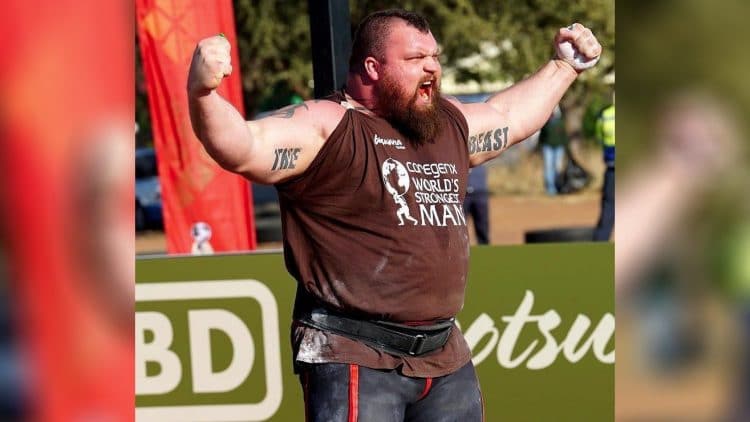 The first Brit to take the title in 24 years.

Eddie Hall has achieved his lifelong dream of becoming the World’s Strongest Man after victory in Botswana.

‘The Beast’ Hall, the first Brit to win the title since Gary Taylor 24 years ago, beat Game of Thrones’ side Hafthor Bjornsson into second and four-time champion Brian Shaw in third.

The World’s Strongest Man Finals standings are below:

Victory in the Viking press, squat lift, and deadlift rounds paved the way for his success that came as a shock to many.

“Eddie has been dreaming about this for the last five or six years of his life. He had to be on the money, his training has been relentless, and his dream has come true.

https://www.youtube.com/watch?v=DyB_LrHm9oU
“In one round he finished fifth so for him to come back from that, whilst competing against some of the legends in the World’s Strongest Man tournament is incredible.

“These guys at the top aren’t amateurs anymore- they are full-time pros and are national giants- people like four-time winner Brian Shaw.”

Mo described the magnitude of Eddie’s achievement, stating that ‘the whole of Britain should be proud.’

“Whatever plaudits he gets now, and fame and fortune will be well deserved- I feel very proud to be involved with him.

“Two and a half years ago when our partnership started he had just finished tenth in the tournament, he then went full time and seeing that growth, and to be a part of that journey has been a dream come true.”

Andy Parker, the owner of Hanley’s Strength Asylum gym where Eddie trains, was delighted with the result.

The 42-year-old, of Baddeley Green, said: “It is an amazing achievement. It is amazing for Eddie, for the gym, for Stoke-on-Trent, and for Britain.

“The standard of Strongman is so high nowadays, with guys like Thor and Shaw around. For Eddie to win in the same era as them makes it so much more special.

“We are all so proud of him – he’ll probably get a thousand lads patting him on the back when he gets home. There’ll be a big party for him.”

Eddie Hall fan Adam Davies, aged 22, said: “Eddie is my favorite sportsman and is the reason I have been training to compete in Strongman. This is huge for the sport in Britain!

“The guy is superhuman. I knew, from how gutted he was last year after breaking two fingers and still coming third, that he would give his all this year.”