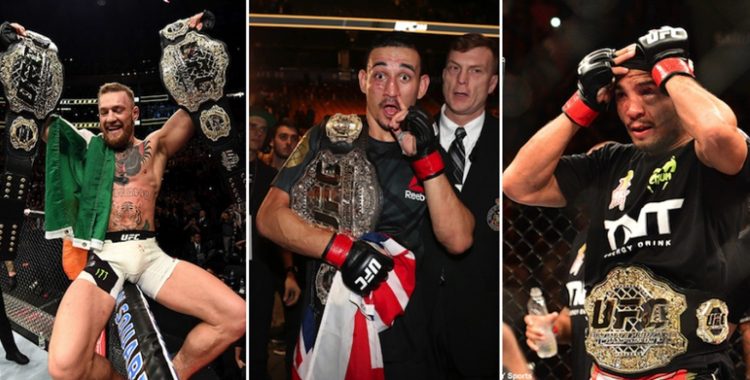 THE featherweight division crowned a new champion when Max Holloway finished Jose Aldo with a third round TKO as he picked up his 11th win overall while becoming the undisputed king at 145 pounds.

Holloway was actually the second person to finish Aldo after Conor McGregor put him to sleep with a one punch knockout when they met back in 2015, but the Irishman never stuck around to defend the title and hasn’t fought at featherweight since then.

While the argument will always rage on concerning who is the greatest of all time at featherweight, UFC commentator Joe Rogan says it all comes down to performances and in this case McGregor has earned his spot atop the list.

“I’ve got say Conor [McGregor] is the greatest 145-pounder of all time cause he knocked out Aldo, who was clearly the greatest,” Rogan explained on his podcast during UFC 212. “But in terms of who’s got more victories of course it’s Aldo. The problem is — we’re not doing MMA math here — you’re having two guys actually fight each other. So if you said who is the greatest of all time? Well it would have to be Aldo because he beat all these guys — no, no no, because the two of them fought and Conor merked him. So you’ve to give it to him.

Rogan understands why so many people battle against the notion that McGregor doesn’t deserve that accolade because while he knocked out Aldo, he never bothered to stick around to actually defend his title.

Add to that, there’s no clear indication that McGregor will ever return to the division while he’s current entrenched as the UFC lightweight champion and also pursuing a huge payday for a boxing match against Floyd Mayweather later this year.
“People will fight against it ‘no because Aldo was the champion for so many years’. You’re 100-percent right. His body of work is much more impressive and there’s always going to be an asterisk next to Conor because that was just this one time he fought for the title at 145 [pounds], KO’d Aldo and was like ya’ll be cool. I’m out of here,” Rogan said.

At the end of the day, Rogan believes it all comes down to the fight itself and when McGregor stepped into the Octagon with Aldo — who hadn’t been defeated in 10 years prior to that night — he left no doubt who was the better fighter.

It also doesn’t hurt that McGregor also holds a unanimous decision win against Holloway from his second fight in the UFC.

“But once they actually fight, that’s it. That’s all that matters. It’s not MMA math. So you’ve got to give it to him.”

WATCH JOE ROGAN DISCUSSING HIS VIEWS ON THE FEATHERWEIGHT GOAT:

WATCH: How To T-Bar Rows By Seth Feroce