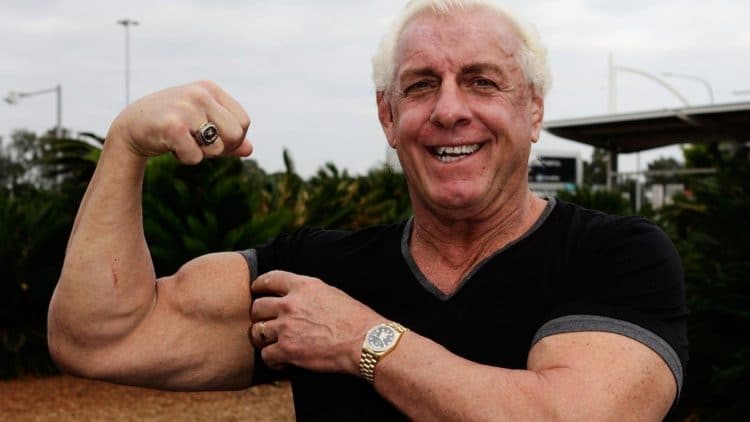 Throughout his professional career, WWE legend Ric Flair has made a living on hitting his opponents inside the wrestling ring. Now at 68-years-old, he is still visibly in shape and can still fight against the best of them.

According to his Instagram post, Flair hurt his hand during a scrap with an anonymous member of Dub-Nation, and displayed his mangled finger as evidence. No further specifics were given as to the reason for the altercation, but it’s likely Flair was defending the good name of LeBron James and his beloved Cleveland Cavs as they suffered another beatdown in Game 2 of the NBA Finals in Oakland.

No Pain No Gain! Lets do it @cavs WOOOOO! pic.twitter.com/vADZZ64ktm

Still, Flair is pumped for his team’s return to Cleveland where he plans to make his presence known. The extroverted wrestler even had a few words for another high-profile Cavs fan. “Rihanna, Move over and Let the Naitch show you how it is done!” he said in a recent Instagram post. “The Nature Boy” is, of course, referring to the pop star who was seen heckling Warriors star Kevin Durant during Game 1 of the Finals.

If he shows up at Quicken Loans Arena on Wednesday night with the cast still on, it could answer a lot of questions about it. However, his fans are hoping he really did not get into a fight and that the action should only happen on the court between the Cavs and Dubs.

How much does Flair love the Cavs? Check him out getting the Cleveland crowd pumped during the 2015 NBA Finals.

If You Talk To ‘The Rock’ While He’s Working Out, ‘He Will Eat You’

The Olympia Weekend Announce The 2017 Amateur Olympia in Las Vegas