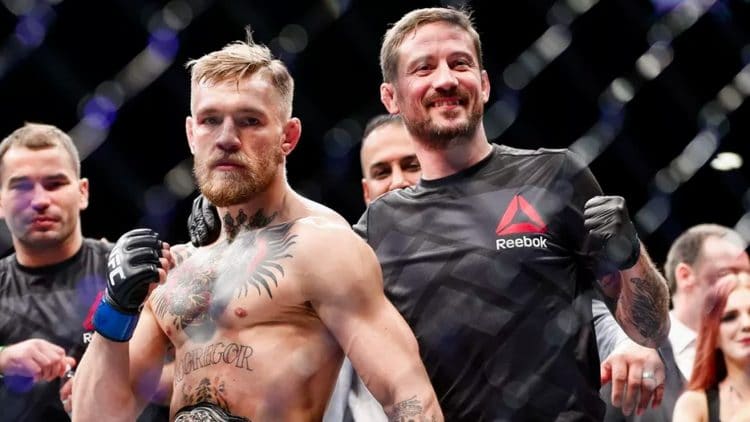 John Kavanagh believes Conor McGregor’s isolated training in boxing will help him when he returns to the Octagon following his polarizing bout with Floyd Mayweather.

In an interview with TheMacLife.com, the SBG head coach revealed that McGregor has been doing four times more training for his boxing bout than he usually would when he preparing to fight in MMA.

“Without going into too much detail – just to throw a number at you – we’re doing four times the amount of sparring for this camp than we would do for a regular MMA camp,” Kavanagh said.

“That’s a huge amount of extra rounds. Whatever other parts you get ready for a fight whether it’s boxing or MMA, without doubt the most important part of that is sparring. That’s the sport. So you can be doing movement drills and weight lifting and running and all of these different things that go with it but number one should be sparring, as long as it’s sensible.”

Although some have concerns that time away from MMA could affect McGregor’s skillset should he return to the Octagon, Kavanagh expects training an isolated skillset to have a “positive effect” on his MMA game.

“It’s a learning experience. You don’t get to do this too often, where you immerse yourself in one style. I read somewhere that people were saying that this would have a negative effect on Conor when he goes back to MMA; I think it’s only going to have a positive effect. When else could you shelve everything and focus on one art?

“Whatever about the other arts in MMA, Conor came from boxing and boxing was always in his heart. He was always showing me different boxing fights over the years, so now that he really gets to immerse himself in it and drag us all deep into that rabbit hole with him it is fascinating.”

Kavanagh reiterated his previous comments, insisting that it is ‘simpler’ to prepare for a boxing contest as opposed to an MMA bout.

“I get in trouble when I say this, but I’m saying it’s simpler because there are just less skills involved as opposed to getting ready for mixed martial arts, boxing is just one element (of mixed martial arts).

When you’re boxing for MMA you don’t go into the same detail as you do when you’re boxing for boxing sake. However, it is just one in a myriad of skills that you need for MMA. It’s simpler, but then on the flip side it’s interesting because you get to really delve deep into what boxing is.”

The jiu-jitsu black belt revealed that McGregor’s striking coach, Owen Roddy, is responsible for putting together McGregor’s game plan for the undefeated boxer.

“I’d have to say right off the bat that it’s Owen Roddy that deserves the credit for putting together the game plan for this one. I’m playing a role in it but I’ve just been sitting back and watching Owen,” stated Kavanagh.

“Owen and Conor have been with me since they were 16 or 17 coming up with plans and playing around with different martial arts and techniques and strategies. Just watching the two of them bounce ideas off each other, whatever it is, 10 or 11 years later, it’s a very proud moment.”