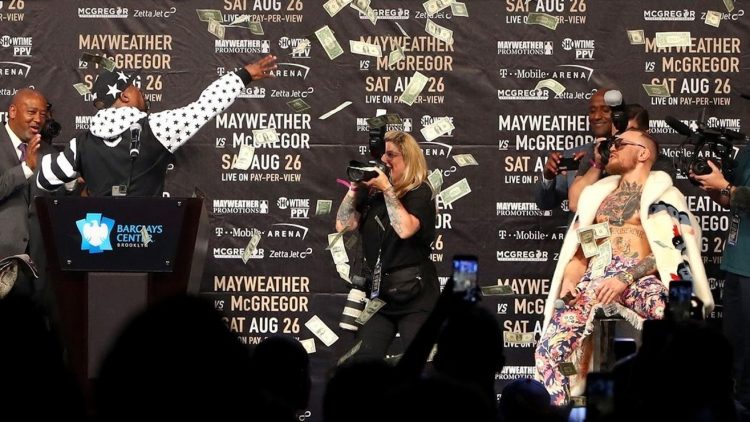 The boxing legend grabbed a rucksack during the third leg of his world tour with Conor McGregor and began throwing notes on the stage.

Mayweather retorted: “Because that’s all you’re worth,” to which his opponent said, “where’s the real money at?”

The subject of Mayweather’s reported tax problems have been a recurring theme this week – and both men are not afraid to splash the cash.

The pair were coming face to face for the third night in succession after visits to Los Angeles and Toronto.

But they failed to deliver for the expectant crowd, having made the 17,000 fans wait two hours for the show to start. not?”

The rants were tired and repetitive as both men appeared to have run out of new material.

Watch Mayweather Make It Rain On The Player Below:

Shortly after taking to the stage, McGregor addressed reports that he had been racist the night before when he asked Mayweather to “dance for me, boy.”

But he said: “A lot of the media claim that I am against black people? I am half black! From the belly button down!”

He then proceeded to gyrate on stage.

When it came to Mayweather’s turn to take the mic, he once again addressed McGregor’s defeat by Nate Diaz last year when the Dubliner tapped out.

And the fight almost broke out six weeks early when Mayweather’s entourage encroached on the stage – and McGregor’s quickly followed.

Mayweather skipped away to leave his opponent at the center of a scuffle that could have turned ugly.

It’s now over to London for the final leg tonight.