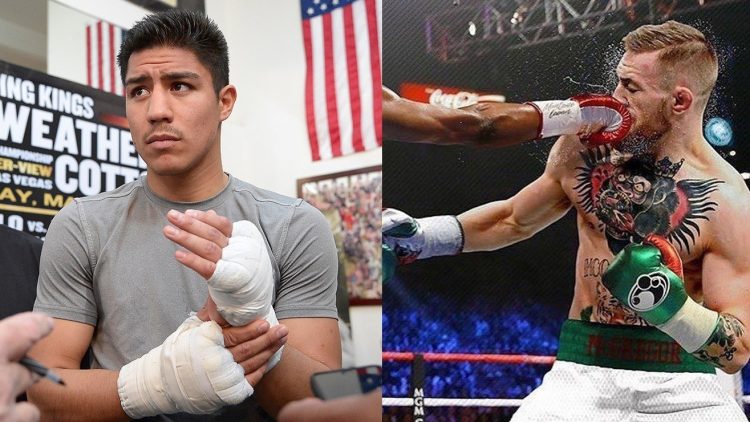 While Conor McGregor spent the last week going toe to toe with Floyd Mayweather Jr. on the microphone, boxer Jessie Vargas cast further doubt on whether McGregor can hang with Mayweather in the ring.

Former lightweight and welterweight world champion Jesse Vargas gave a surprise interview this weekend. Speaking to Villainfy Media, Vargas claims that McGregor has already been KO’d in sparring for Mayweather.

After the first one I lost track of it, it was just so annoying. It was the same thing over and over again, they just overdid it. I guess that’s what the fans want to see, it was insane, though. There was just too much trash talking, and there were too many bad words.

I just got tired of it, but I’m looking forward to seeing Floyd get the victory by knockout. Conor is going to get knocked out. Floyd always lives up to the hype, I have no doubt about that, Floyd will get the victory. I actually wanna put some money on it, you know, Conor has like 1% chance of winning.

“He’s Already Been Knocked Out in Sparring”

Floyd has 99-100% chance of winning. It’s only that 1% that Conor could land that bigger punch, maybe half or negative percentage. He got knocked out in sparring already, we were hearing stories. The boxing world is small, you hear these things. I heard they tried Brandon Rios, but he knocked (Conor) out, so they had to push him away.”

According to McGregor himself earlier this week, he’s requested former champ Paulie Malignaggi as a sparring partner for Mayweather:

While considered a great striker in a mixed martial arts capacity, many questions whether McGregor has bitten off more than he can chew in a fight against Mayweather.

In June, Chris van Heerden shared a clip of himself sparring with McGregor, and the UFC lightweight champion looked overmatched:

People telling me Mayweather will have his hands full trying to land on McGregor -STOP IT! I respect McGregor BUT i ain't Floyd and i landed pic.twitter.com/gd4dFi3XUU

McGregor also failed to silence his critics with a training montage he posted to Twitter in June:

Mayweather posted a training clip on the same day and hasn’t appeared to lose much speed despite spending over a year-and-a-half out of the ring:

According to OddsShark, McGregor is a 7-2 underdog against Mayweather.

McGregor’s months of training should pay off with regard to making him an improved boxer, but he’s facing a nearly impossible task of bridging a gap with one of the best defensive boxers in the history of the sport.

WATCH: The Most Crazy Posing Routine, We’ve Ever Seen!