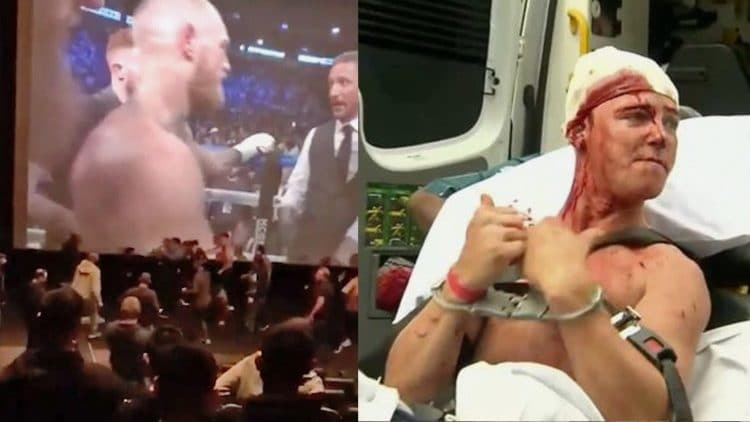 A footage has emerged of a huge brawl broke out at a cinema screening of the bout between Conor McGregor and Floyd Mayweather.

VUE Cinema put on special airings of the fight across the United Kingdom and Ireland. Two groups of men were watching the fight at Vue cinema in Bury, Greater Manchester, started fighting at about 5:30 am on Sunday.

The fighting appears to have started straight after the Mayweather, McGregor fight had concluded. In the footage, a large group of people can be seen trying out their best MMA moves, throwing punches and kicks at anyone within range.

Security staff employed by the cinema were said to be ‘outnumbered’ and the police were called, a witness said.

The viewers at the Vue Cinemas in Bury weren’t the only ones to get inspired by the mega-fight: a brawl also occurred inside Surfers Paradise Beer Garden in Queensland, Australia, as customers watched the fight.

The footage shows around 10 people swinging haymakers during an all-in scrap. Other patrons can be seen cheering, clapping, and filming the melee on their phones.

One man was seen being lifted into an ambulance as blood streamed down his neck.

The man claimed that the police had pushed him down for no reason and then maced him.

Check out the Fight at UK Cinema below:

Here’s the chaos from Surfer’s:

There was also a report of the gun battle near at Cromwell Casino in the Drai’s nightclub – two blocks away from the T Mobile arena where the boxers slugged it out.

Las Vegas Metro police confirmed the Cromwell casino and Drai’s were evacuated after ‘shots were fired’ but no one was injured.

They later confirmed that no shots were fired, but after the fight broke out and statues were pushed over causing people to report the gun fire.