Bodybuilder Tyler Cooke has fiercely denied claims that his jaw-dropping photos of his physique are fake, and insisted his ‘near impossible’ body is the result of hard work alone.

The 21-year-old Tyler Cooke, from Liverpool, spoke out after ‘Generation Iron’ asked the question if his body is ‘all natural or photoshopped?’

But Tyler has hit back at critics by sharing more photos and video, telling on the social media that his body is simply down to “hard work”.

Tyler says genetics also probably has something to do with it as well, but he hasn’t missed a trip to the gym in five years.

Tyler, who started bodybuilding at just 15, told the Liverpool Echo:

“It really is just a lot of hard work – I like to bodybuild and so I do it.

“I have not missed a meal or a trip to the gym in the last five years and I work out properly.

“Sure there is an element of genetics to it, I can’t deny that – but I have worked hard and it has paid off.”

Tyler also says that his diet plays a big role in maintaining his huge frame, his average meal consists of ten eggs and 400g of white rice, or four jacket potatoes and 400g of chicken.

“In the off-season when I am trying to build mass I eat about 5,000 calories a day.

Training from a young age, Tyler is now a full-time coach at a local gym and can lift 400lbs in a squat.

He said that while he enjoys bodybuilding his real passion is helping people get and keep fit.

“I don’t want people to look at me and think fitness is this impossible thing.

“Everyone can get fit and look after themselves and I want to support as many people as possible to do that.

“Looking after yourself is something that is really easy to fall by the wayside – people are busy with work and kids.

“But they’ll thank you for looking after yourself and you’ll enjoy life more. So just take it one step at a time and find something you like doing and keep at it.

“Remember, not everyone has to be a bodybuilder.”

Tyler’s message about his transformation 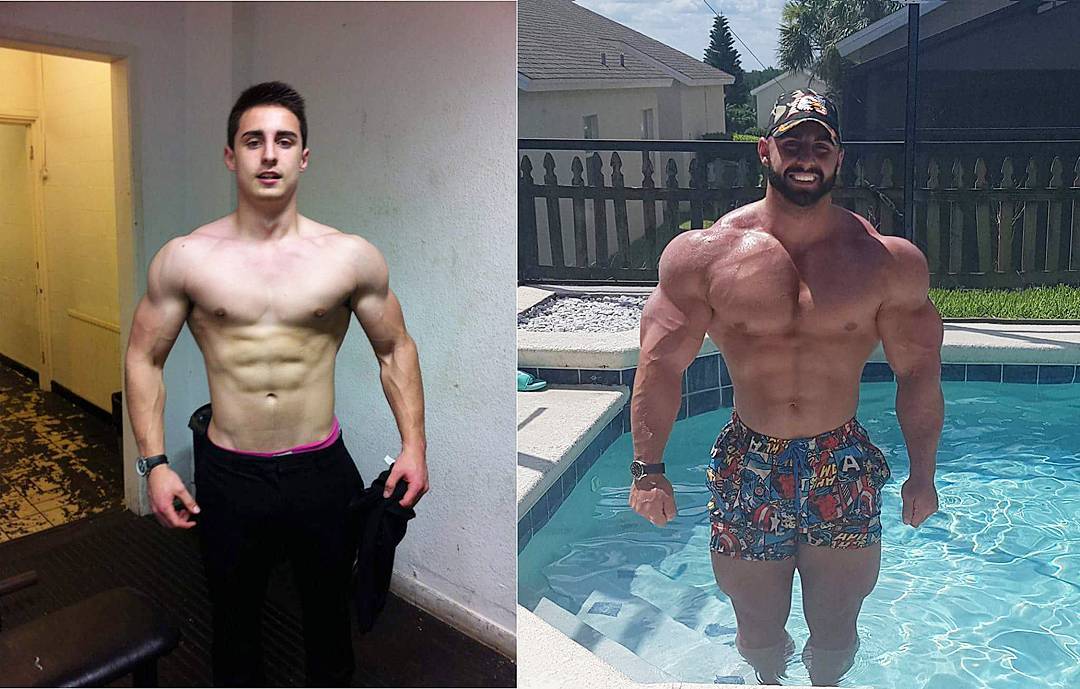 The picture on the left, I’ve never posted until now. I remember working at Holland and Barret, id been training for 5 months, and got this pic after work, it made me wanna quit.

It made me wonder why I bothered spending my few evening hours I had heading to the gym in my work uniform.

And if I’m honest, I don’t know why I carried on. It makes no sense even now. I’m not religious, but I knew there was just something in this for me, and still now, when I have doubts, I keep pushing, because there is something in this, just like there was 5 years ago.

In 5 years I’ve learnt, read, became a coach, competed, made friends, and built some f***ing muscle.

I laugh at people who blame genetics…especially for size, I’ve came from a tiny frame, with no signs of being what I am now..its so easy to give up, thats why only the committed unleash whats inside.

I’m telling you now there is lads out there that would have been better than Phil Heath, or Arnold, but given up before they knew what was there. Genetics aren’t revealed in 6 months, 12…or even 3 years, try 5, then tell me you cant grow.

Now I’m doing my bit helping lads go from.the left, to their best version of themselves.

I also love looking at the mole on my left shoulder, its stayed in the same place while my delts have grown haha”

What you think about his physique? Let us know in the comments below.

WATCH: What Happens When A Bodybuilder Physique Knows Martial Arts?

Bodybuilders are thought to be inefficient in the world of martial arts, but what happens when you teach a bodybuilder...

Here is the inspiring tale of a very tall Dutch bodybuilder Olivier Richters who has made incredible long-term progress despite...

A bodybuilder spent $7000+ and around 200 agonizing hours getting his entire full-body tattoo suit in just under a year....

WATCH: The 10 Most Extreme Female Bodybuilders

Bodybuilding is a sport where an average person can push the limits of exercise and genetics to become something extraordinary,...