Francis Ngannou is without a doubt one of the scariest human being on the planet. If he isn’t, he’ll have his chance to become that at UFC 220 on Jan. 20 when he takes on UFC heavyweight champion Stipe Miocic.

For his preparation for the highly-anticipated UFC 220 showdown with Miocic, Ngannou is in the gym working hard. Unfortunately for UFC middleweight contender Uriah Hall, that hard work turned into a lesson in size and physical dominance.

During a brief sparring session, Ngannou and Hall were going tit-for-tat on the feet. Once “Predator” got a hold of Hall and playfully picked him up in the air we really got a sense of how overpowering the French heavyweight truly is.

Watch the clip below with Ngannou and Hall having a fun session together:

Uriah Hall:”Think this was one of the scariest moments in my life with @francisngannou”

Well, Hall isn’t a small middleweight, yet Ngannou picked him up with the same ease as knocking out Alistair Overeem at UFC 218.

If Hall is any indication as to what Ngannou can do to a man smaller than him, Miocic may want to pack on some extra muscle for their upcoming title fight. 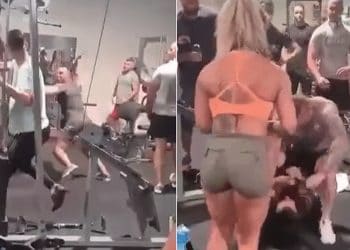