On Friday a strange scene unfolded at Rizin Fighting Federation show in Saitama, Japan as Gabi Garcia was brought into the ring to apologize for the weigh-in mishap that led to the cancellation of her bout with 53-year-old Shinobu Kandori. There was a 50-pound difference between Kandori and the contracted 209 lbs that Garcia was to hit.

Then Garcia missed weight by 28 pounds, weighing in at 236.9 lbs to Kandori’s 162.25 lbs. The despicable fight that never, ever, ever should have been made was canceled.

Later, it was revealed that Garcia and Kandori would come out to address the crowd during the show. Garcia offered a tearful apology to the fans. The Brazilian fought back tears while explaining what went wrong, and she hinted that it stemmed from a medical issue she believed has since been resolved.

“This is the first time this happened in my life,” Garcia said. “I had problems, three weeks before the fight. I think I recovered. My first training here, my nose is with blood and my blood pressure (was off). I can’t cut weight because I have many problems.

“I respect her. I respect my opponent. She’s a legend here, and I’m so sad. I cry a lot because this is the first time I didn’t enter (the arena down the entrance). I entered through the back.

“I need to say sorry for all my fans in Japan,” she continued. “I love you guys. I challenge (Kandori) for next year for the weight. I’ll cut the weight. This happened (for the) first time, and if you need a fight with me, it will be satisfied next year. I’m so sorry Japan. I love you guys, and I’m (coming) back more strong than ever.”

That apology did not appear to be sufficient as she then proceeded to drop to her knees in the middle of the ring and express regret over her mistake even more profusely:

Garcia’s Instagram offers a timeline, before the “fight” she was healthy. 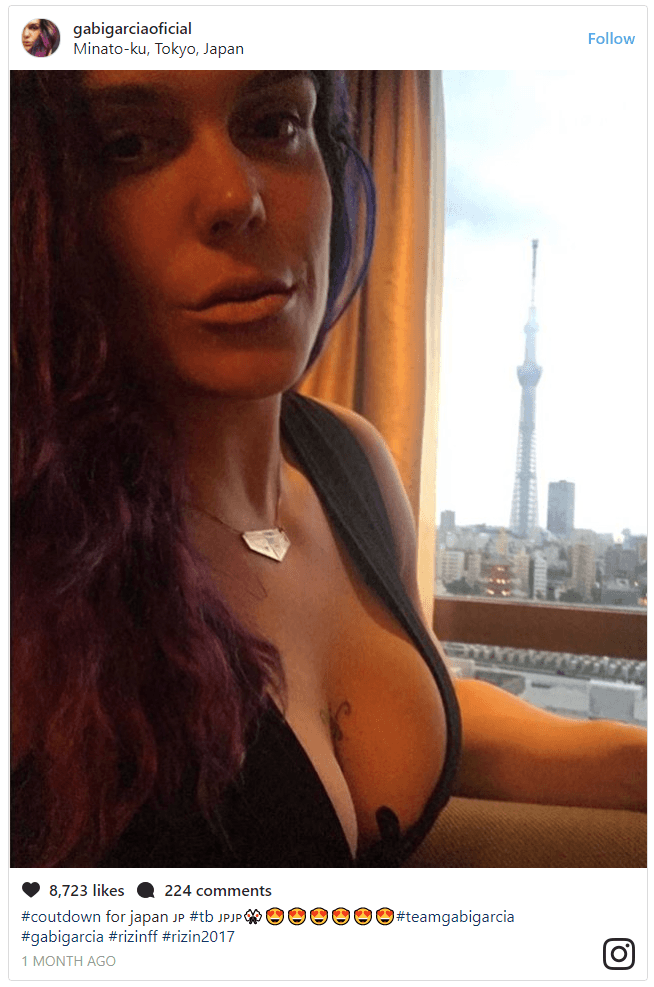 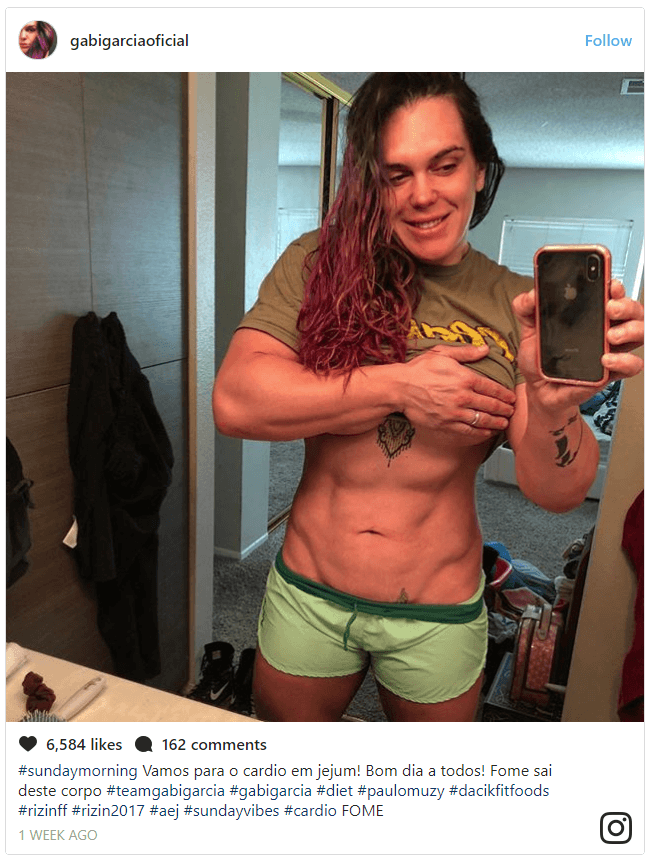 On December 27, she began to cut water. 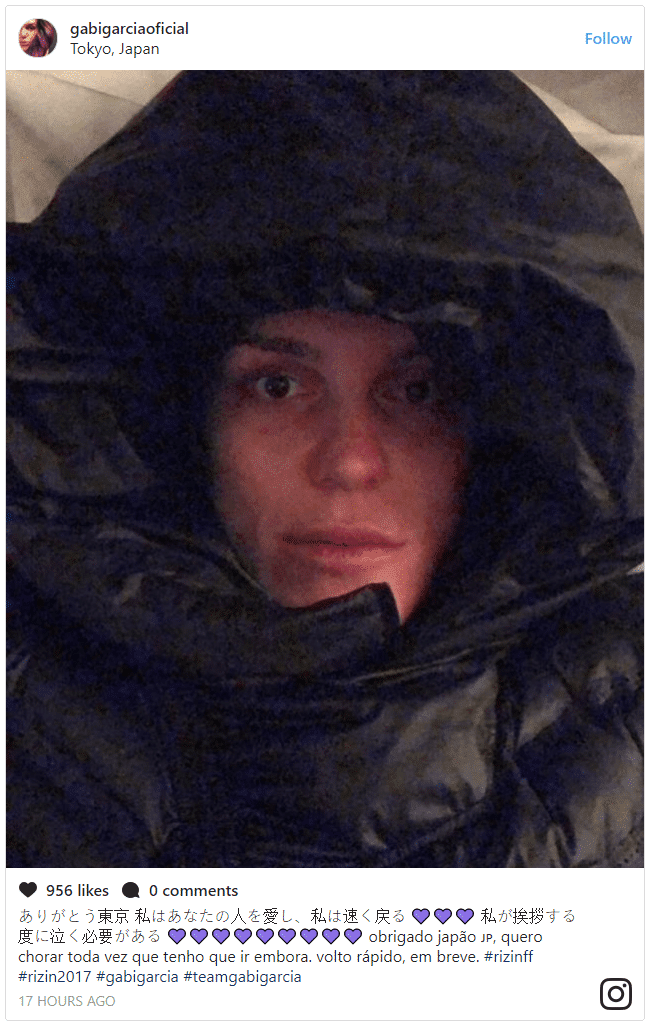 Then something went horribly wrong. Garcia took to social media and provided a statement and a number of photos with more details about her struggles to cut weight: 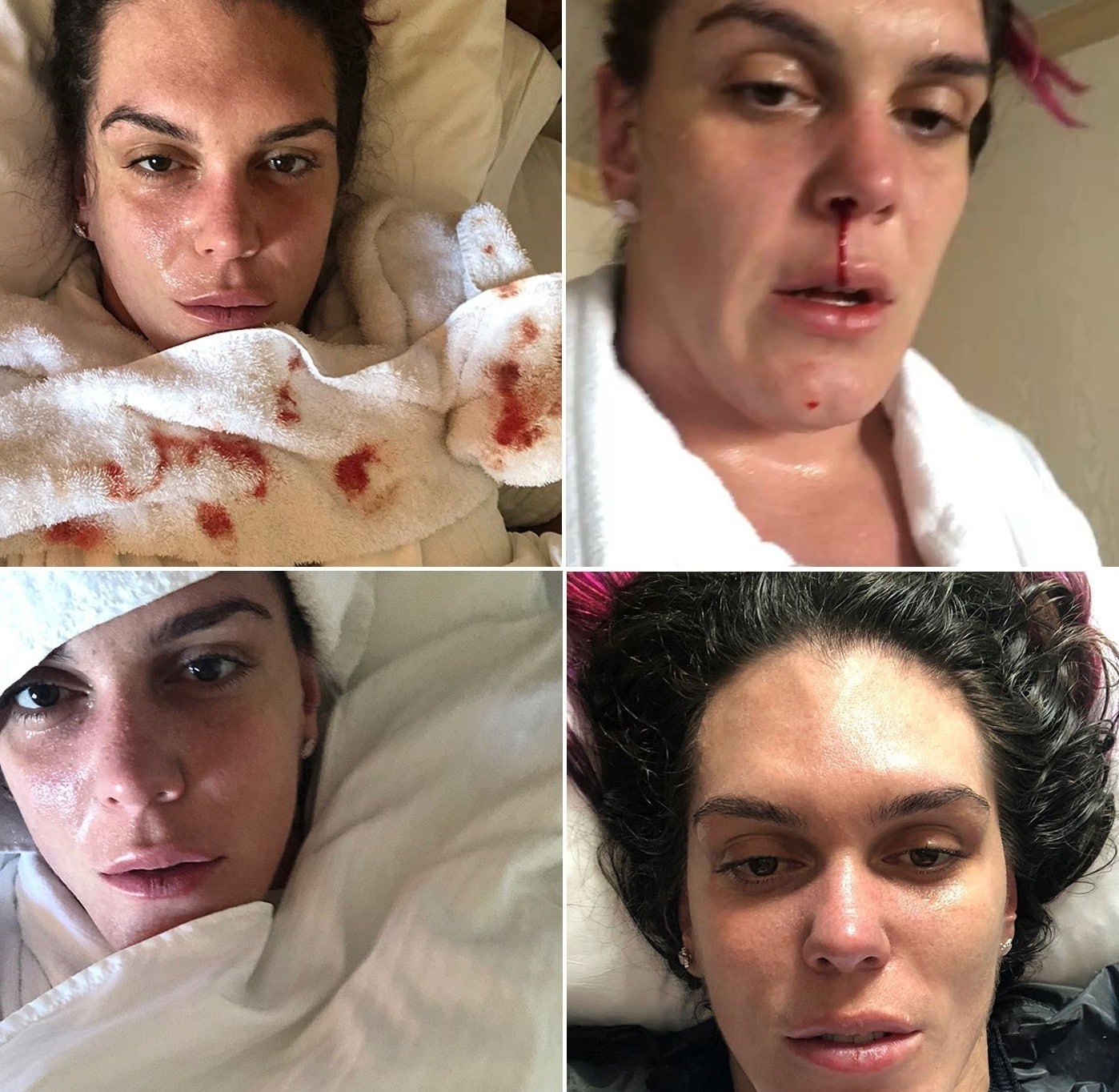 Everyone is looking for an excuse, but when it comes to health and our lives they can say it’s anything.

My life first. pass the photos to the side! Unfortunately a few days ago I measured my pressure and was high, I thought it was only that day. When I got off the plane in Japan I went to my training and started to have a headache, my eyesight blurred and my nose bleeding all the time.

I warned my team, but I did not tell anyone because I did not give up. After all my training, my nose was bleeding from leaving a towel next to it. It was fine the night before and I decided to cut the weight the next morning, but I woke up with fever and again with my nose dripping, high blood pressure.

Too much stress before traveling, unfortunately I still do not control my body, but I control my decisions. For those who have lost a brother, dying for a cut of weight would not be my choice. All together, menstrual period, high blood pressure, it was necessary to cut 17 pounds.

I chose to live. No need to post any explanation, but no one knows what people are going through. Do not judge. Thank you @rizin_pr @rizin_staff for cherishing my life. I went up to the Saitama ring and apologized to my fans, who continue to support me and asked for my return.

I’m going to rest, and get better back in 2018. With lots of news and going all the way. #rizinff #rizin2017 #gabigarcia #teamgabigarcia 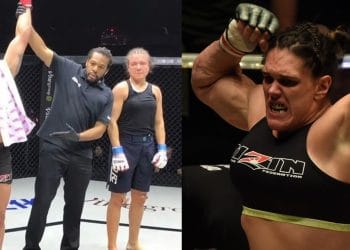 WATCH: 235-pound Gabi Garcia Chokes Out Veronika Futina in The First Round at Road FC 47

Not shocking Gabi Garcia easily handles Veronika Futina Finally, Gabi Garcia is back in action by scoring a win over... 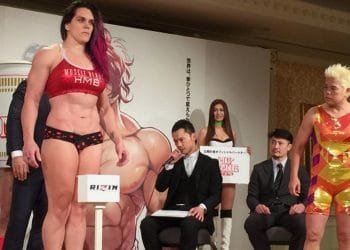 Gabi Garcia fought twice in July, and both fights ended in no contests. The Brazilian jiu-jitsu ace, who landed a... 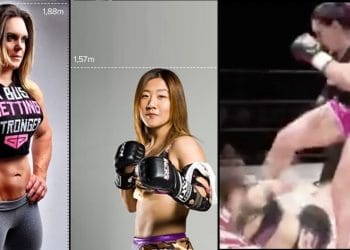 Jiu-Jitsu fighter Gabi Garcia fought the much, much smaller Megumi Yabushita in Japan on Friday and unsurprisingly implemented yet another...