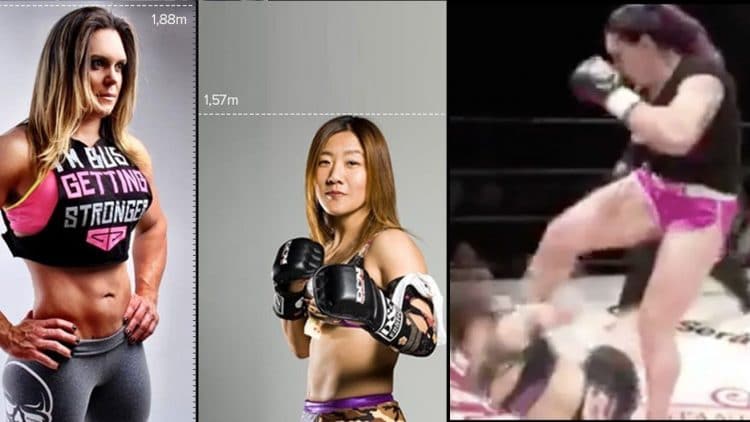 Jiu-Jitsu fighter Gabi Garcia fought the much, much smaller Megumi Yabushita in Japan on Friday and unsurprisingly implemented yet another illegal tactic.

When you think you're having a bad day . . . . remember you could be this woman about to take on Gabi Garcia 🙄 pic.twitter.com/X1GzDtpSz2

The 6-foot-2, 209-pound Brazilian was pitted against 5-foot-2, 134-pound Megumi Yabushita, a 45-year-old with more than 20 years of MMA experience. Predictably, things did not end well for the more seasoned and much smaller fighter.

Garcia dropped Yabushita with a punchless than two minutes into the first round and followed it up with an illegal soccer kick to the upper body of her downed opponent.

Gabi Garcia fight was a no contest due to illegal soccer kick pic.twitter.com/JEWo6vKU13

That was it for Yabushita, who injured her shoulder on the final blow and left the ring with her arm in a sling.

The fight was ruled a no-contest and not a disqualification, as the referee deemed Garcia’s illegal kick to be unintentional. It was clear Garcia didn’t quite grasp the rules of shoot boxing — she was also penalized earlier in the fight for a similar infraction. Shoot boxing only permits punches, knees, elbows, throws, and submissions from a standing position.

This was the second time Garcia has been matched up against an inferior opponent. In December, the nine-time world jiu-jitsu champion bludgeoned 49-year-old pro wrestler Yumiko Hotta at Rizin Fighting Federation 4.

Many MMA fans were absolutely outraged.

Gabi Garcia is a joke to WMMA. Now is booked to fight a 5'2 woman who's 45 years old. And to make it worse she's lost her last 7 fights.

Who are these people who will pay to see Gabi Garcia fight?

Garcia’s next fight should be a little more competitive, as she is set to take on 24-year-old Russian Oksana Gogloeva, who is 5-foot-11 and 220 pounds, at Rizin FF 6 on July 29.