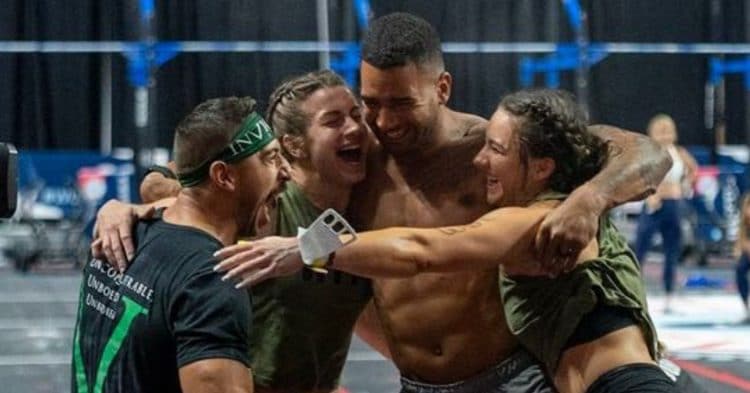 The 2021 CrossFit Games has been having a string of bad luck, in terms of positive drug tests over the last few weeks. Team Invictus Unconquerable is the latest to fall victim to this, as they have been disqualified from the contest due to a failure from one of their members.

Team Invictus Unconquerable is made up of four team members: Deshawn Smith, Alex Bozenhard, Taylor Jo, and Devyn Kim. They had qualified for this year’s CrossFit Games after coming in second place at the West Coast Classic.

Unfortunately they will be removed from the Games, after Deshawn Smith tested positive for a banned substance, in a urine sample collected at the West Coast Classic. According to a lengthy post to his Instagram, he popped for Endurobol, which the CrossFit drug testing procedure classifies as an anabolic agent.

“I want to start by saying that in NO way, SHAPE or FORM do I want, nor will I accept ANY sort of pity or sympathy for what I am about to share. I wish to simply say some things that I feel need to be said,” Smith wrote.

“I will not be competing in the upcoming CrossFit games… I will save the details for my official appeal but with that being said; From a urinalysis administered at the west coast classic, metabolites from the SARM GW1516 were found to be in my system. This of course violates CrossFit’s drug policy. Because of this, my team, Invictus Unconquerable as a whole will be disqualified.

To CJ and the Invictus family, thank you guys for the support and everything you have done to make this whole experience one that I’ll never forget. Your love and faith in me as an athlete and believing in me enough to let me go out and represent Invictus on this stage is more than I could have ever dreamt of. Thank you,” Smith added.

“In the same breath, I’m sorry. Sorry for not paying close enough attention to the dangers of contaminated supplements and not being educated enough as to what goes into my body. At the end of the day I’m responsible…

I will not let this situation define me. I am no stranger to adversity and I have yet to face any that I cannot overcome. This will be no different. We live, we learn, and we come back callused and stronger than before. This is not the end and not the last you’ll see of me on the CrossFit stage. I’ll be back, head held high.”

It is worth noting that Smith plans to appeal this decision. That being said, Team Invictus Unconquerable is not the first team to have their 2021 CrossFit Games spot compromised because of a drug test.

In fact, this is the second team this week, as Move Fast Lift Heavy had a member also pop on a drug test. Furthermore, a few weeks earlier, Team On Track had another drug test failure, forcing them out as well.

The 2021 CrossFit Games goes down from July 27th-August 1st, in Madison Wisconsin. Team Invictius Unconquerable will be replaced by Team Man Made, who was next in line to qualify at the West Coast Classic.