In a recent Q&A, Brian Shaw reveals his most painful injury from his strongman career, and discusses comparisons between the Shaw Classic and the World's Strongest Man 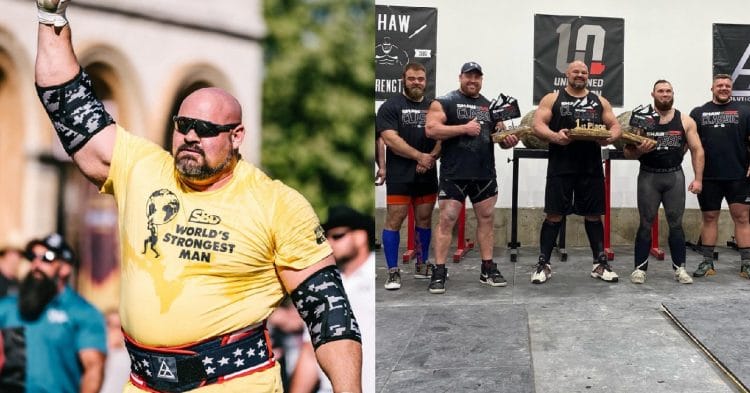 Brian Shaw is preparing to put on the second ever Shaw Classic, set to go down later this year. Despite receiving some comparisons to the World’s Strongest Man, he says it is not his goal to be bigger than this other competition.

The inaugural Shaw Classic was a massive success, with tons of exciting action and world records even being set. So naturally it makes sense that Brian would want to bring this contest back for a second year, which he plans to do, making it bigger and better than before.

With the level of competition that he is able to secure for the contest, and the nature of him having a live stream during the contest as opposed to how the World’s Strongest Man uses tape delay, fans have wondered if one day Brian’s event will be bigger than the WSM. Speaking in a video on his YouTube channel, Brian answered this question, saying that this is not his intention at all, and that he just wants to make his own competition.

“I don’t really know, and to be honest World’s Strongest Man is the pinnacle of strongman. It’s been around since 1977, and it’s such a long running competition, it has so much history built into it, that my goal is not to come in and be World’s Strongest Man. My goal is to come in and be the Shaw Classic, and be a contest by the athletes, for the athletes, that’s doing right by them, that’s doing right by the fans and the spectators,” Shaw said.

“Essentially it’s all of the ideas that I have had over my years of competing, of the right way to do a strongman contest, the correct set of events or format to find the strongest man, and I’m just taking action on it. I’m trying to make it happen, and after the reception that we have last year, I knew that it was the right thing, and I felt like it was very needed in the sport of strongman. But I’m not trying to compare myself or the Shaw Classic to any competition.

“I wish the world’s strongest man nothing but the best, and I really enjoyed competing there this year,” Shaw added. “We’re moving forward with the Shaw Classic, and I know that inevitably there’s those comparisons that get made, but again we’re staying an our lane, and doing it the way that I envisioned it, and the way we want to do it.”

Thay being said, The way he wants to do it does not involve mystery events. Someone else asked him about this later on in the Q&A, and he made it clear that this is never going to happen at the Shaw Classic, because the athletes absolutely despise these types of things.

“From a safety perspective, being able to train and prepare for the events that you know are going to be in the competition is very important. That’s why I try to put the events out so early for The Shaw Classic, let all of the guys know what’s going on, try to get them more details if they have any questions, things like that. I feel like a mystery event or something like that might be fun for the fans, but I promise you it is not fun for the athletes.”

As Brian Shaw explained, knowing the events in advance does make it less likely that athletes will get injured. That being said, this is still a very intense sport and injuries still happen.

When Brian was asked what the most painful injury he has ever sustained is, it surprisingly did not come from the World’s Strongest Man. Instead it was a torn muscle at the Arnold Strongman Classic that caused him the most grief.

“If I had pick the worst, I would say it’s probably my bicep tear/detachment at the Arnold Classic in 2012. I did that on the very first rep of the competition with the axle, it was an axle clean-only event as silly as that sounds, but it took my bicep off,” Brian Shaw said.

“From there, I went back, I competed in the next event, which was circus dumbbell. That night I went to the doctor to get checked out, I was told that it was torn off. My first question back was ‘Well, can I still compete?’ and the doctor, rightfully so, thought I was nuts. Whatever, but I continued with that competition, I finished the Arnold Classic that year. The most painful event was the frame carry, no straps that year, and it was excruciatingly painful to go through that and finish that competition, but I just didn’t have any quit in me, and in my mind had trained too hard to just give up and walk away.”

This was some pretty interesting assessments from Brian Shaw about his contests, and his history with injuries. He continues to be an insightful ambassador for the sport of strongman.