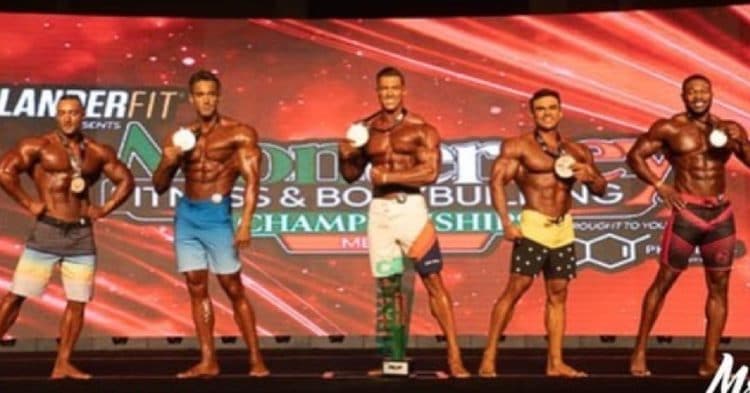 The 2021 Monterrey Fitness and Bodybuilding Championships took place October 16th, in Monterrey, Mexico. This is the complete results of this bodybuilding contest.

The bodybuilding world stays a busy one, as just one week after the biggest contest in the sport, the 2021 Mr. Olympia, competitors were back on stage in a multitude of IFBB Pro League competitions. Among these was the Monterrey Fitness and Bodybuilding Championships.

This contest featured just two divisions: Men’s Physique competition, and the Wellness Division which made it’s first ever appearance on the Olympia stage last week. This time around though, competitors were looking to earn invitations to the 2022 Olympia early on, by winning this contest.

This was just one of the many reasons why the 2021 Monterrey Fitness and Bodybuilding Championships was worth tuning into and checking out. Of course, this was only amplified when looking at the roster of competitors on the lineup, with both divisions having competitors who are fresh off of top six performances at the Olympia, just one week earlier.

In the end however, only one Men’s Physique bodybuilder and a single Wellness athlete could end the weekend with the win and qualify for the Mr. Olympia next year. This coveted spot means that, if they so choose, this man and woman would not have to compete again until the big show, allowing them to work on their physiques to look even better next year.

On the Men’s Physique side of things, it was Carlos DeOliveira who got the job done, riding high off the back of his 6th place showing at the Olympia. Then for the Wellness Division, Giselle Machado got the job done, earning her invitation to the Olympia after failing to compete this year.

Congratulations are in order to all of the winners of the 2021 Monterrey Fitness and Bodybuilding Championships. It will be exciting to see how these athletes look after being able to take time to improve all season long, before stepping back on stage at the 2022 Mr. Olympia.