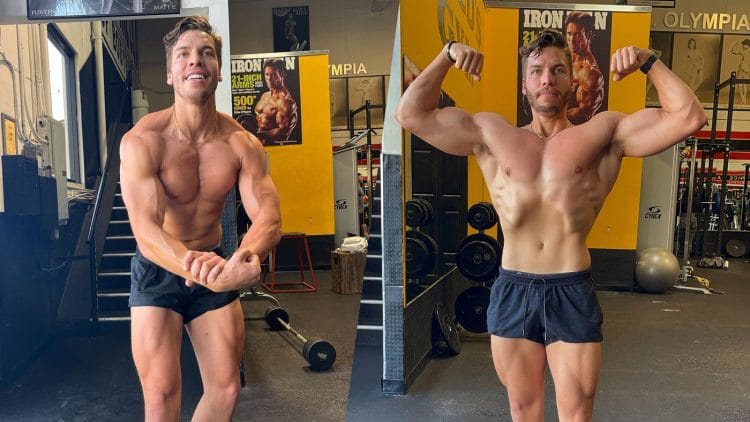 Arnold Schwarzenegger believes that consistency and routine are a key to achieving a quality life and his son Joseph Baena follows his father’s footsteps with dedication. Baena regularly trains at Gold’s Gym in Venice Beach and posts his workout photos to keep his followers updated with his progress in the gym.

Most recently, Joseph Baena posted shirtless photos on his Instagram account and asked his followers to give him costume ideas for this Halloween. Baena showed off his chiseled physique in different bodybuilding poses which were reminiscent of some of Arnold Schwarzenegger’s most iconic photos.

“Bet you can’t guess my Halloween costume this year! (I don’t actually have one but I need ideas).” Joseph Baena wrote in the caption.

“You’re going to be a NutriBullet because you’ve clearly been downing shakes.” Philip commented.

Like most of us, Joseph Baena was forced to work out at home in 2020. This year, however, Baena returned to the gym with his father. Looking at the 23-year-old’s Instagram account, it seems that he is working hard to make up for the time lost due to Covid-imposed lockdown.

Joseph Baena has inherited Arnold Schwarzenegger’s love for bodybuilding and has shown interest in competing as a professional bodybuilder in the past. However,Baena announced earlier this year that he had started a new career as a realtor and he currently works with his team Aria Properties. The 23-year-old primarily posted workout and gym photos on Instagram where he recreated some of Arnold’s most iconic poses. However, Baena’s recent Instagram posts shed light on a new busy routine that is vastly different from his life before.

Back in June, the 23-year-old posted a carousel of photos capturing moments from a busy week. The post included a trademark shirtless gym photo, a short video of the grappling session and the time spent catching up on Work and Play in Los Angeles. Courtesy to Joseph Baena’s Instagram account, you can watch the post here:

“A busy week full of hard work and good fun. Let’s keep it going!” Joseph Baena wrote in the caption.

Pro bodybuilder Nick Walker is arguably one of the brightest prospects of our time. The 2021 Arnold Classic winner has...

Former four-time Mr. Olympia Jay Cutler is a formative figurehead in the world of bodybuilding. Recently, Jay Cutler found himself...