The inaugural edition of the Slap Fighting Championships provided an epic display of slap fighting superstars. 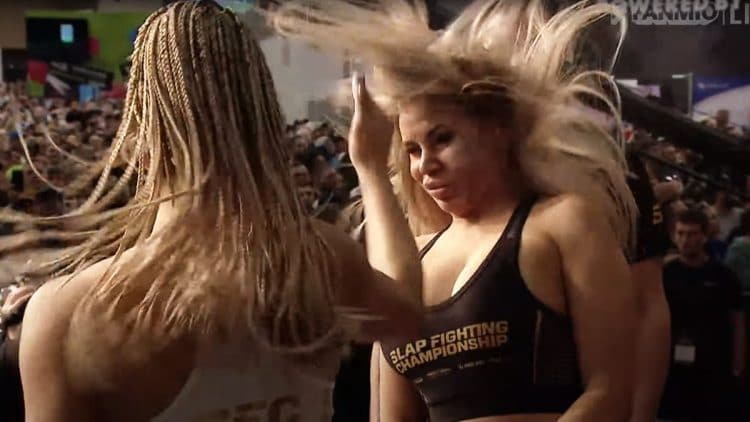 The 2022 Arnold Classic Slap Fighting Championships was a project collaboration between 7x Mr. Olympia champion Arnold Schwarzenegger and a YouTube star, Logan Paul. They agreed to host the inaugural event at the 2022 Arnold Sports Festival, which is happening from March 3rd to 6th in Columbus, Ohio.

This was the first time that the unusual and fast-growing combat sport from eastern Europe was organized in America. Logan Paul is a big fan of the sport, and it was originally his idea to bring it to America. Arnold also took interest and provided them with a platform to host the event.

Slap fighting is a sport in which two fighters take turns in slapping each other, and see who can inflict more damage. Usually, the competitors are two robust and powerful fighters. This sport is quickly getting some attention from the public, and even some social media influencers got into the sport and regularly compete.

Both Adrianna and Julia are famous Polish reality TV stars. However, Adrianna has some experience in slap fighting and has not been defeated prior to this match. On the other hand, this slap fighting match was Julia Kruzer’s first one.

After three rounds Adrianna “Flychanelle” Sledz was the winner with a unanimous decision from the judges. Adrianna comfortably won all three rounds of the duel, and still remains undefeated.

“The Predator” or Nikolas Toth has had one official match until now, and lost it. However, he is a very strong man, and holds the Slovakian Deadlift Record of 848.7 lbs. Mad Max, on the other hand, is an experienced slap fighter. He has won 5 matches and lost two.

Nikolas Toth got the first slap of the match, and it immediately shook Mad Max up. However, Mad Max got himself together and Knocked Out Nikolas with his first slap. The fight was finished after only one round. Mad Max claimed another win to his record, and it was done with style.

this is absurd. and happening right now #SlapFightingChampionship

Karol Wylupek’s slap fight record before this match is 2 wins and 1 loss. Pater Tuchlik has also lost just one match before this, but has also won one match more than Karol.

Pater’s first hit of the match almost knocked out Karol, but he managed to get himself up. Karol tried to fight back, but following his first hit Pater pulled out a comb for his beard and mocked him. This duel was the the first one to be tied after three rounds and had to go to overtime. Pater Truchlik secured the win with an extremely powerful slap.

This was Kucik’s debut fight, while Kazek has experience, and has even trained boxing for a while. Kazek has already taken part in 2 slap fights, of which he won one.

Kazek started the fight with a bang and inflicted serious damage. Kucik’s first slap was relatively weak, compared to the others. After three rounds, Mateusz Kazek was pronounced the winner on the judge’s decision.

Koa Viernes, also known as Da Crazy Hawaiian, faced Dawid Zalewski on the main card of the event. Both athletes were undefeated going into this match, and one of them was bound to lose their streak. In addition, Koa Viernes was the only American representative in the entire event. 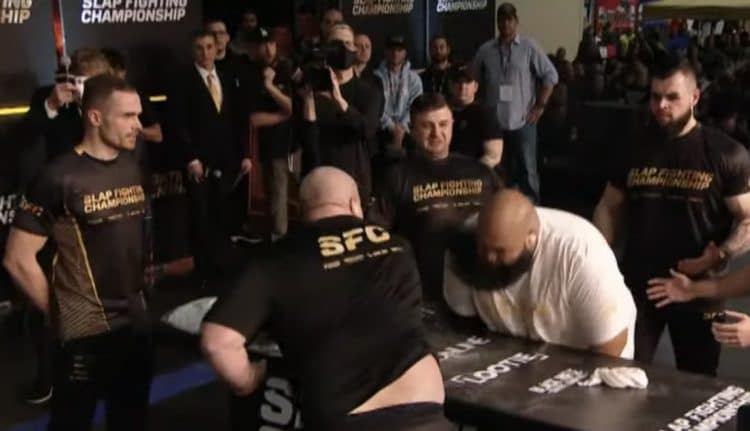 The main card of the 2022 Arnold Classic Slap Fighting Championship definitely justified the expectations. The two athletes were trash-talking each other the entire time, which made the fight even more interesting. Koa’s second hit seriously shook up Zales, but he got up in the 30 seconds limit. However, with the very next hit Zales Knocked Out Da Crazy Hawaiian.

An athlete can win in four ways:

The judges evaluate the hitting technique, precision, and the severity of injuries on the opponent’s face. If there is a point tie after five rounds, both athletes will get one more hit.

Logan Paul has held an interest in slap fights for a long time now. He was even supposed to take part in one Russian competition but decided against it after slapping a person for his YouTube channel. Not long after that, Logan got accused of staging it for his video, but he has denied all the fake allegations. However, Logan is still attracted to the sport, which is why he got involved in this.

Arnold also has his reasons and also believes that people will enjoy watching the matches.

“Why this is the perfect event is because Arnold Classic is a sports and fitness festival. We never choose and kind of have an attitude about what the sport is. So people ask me, “Slap competition? Why would you have that?” I said I got the same question about when we had an axe throwing competition…”

Arnold Schwarzenegger got a first row seat of the show, but there was an incredible number of people watching the 2022 Arnold Classic Slap Fighting Championship. If the slap fighting makes a comeback at the next Arnold’s, it would be nice to see Vasilii “Dumpling” Kamotskii. Vasilii is definitely one of the greatest athletes in the sport, and is probably the most recognizable. The sport initially got some attention through viral videos of the Dumpling slap fighting.

The 2022 Mr. Olympia contest was held in Las Vegas, Nevada this year and after the smoke cleared, Chris Bumstead...