Lucy Underdown was the star of the show, having won every event in the women's division. 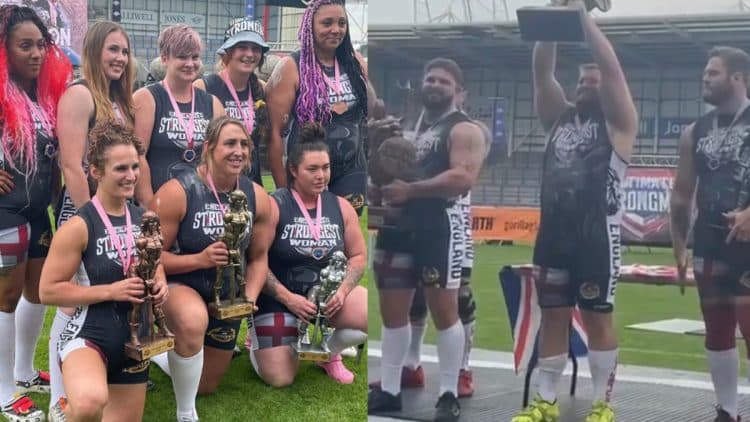 The 2022 England’s Strongest Man & Woman contests took place on August 28, 2022, at the Halliwell Jones Stadium, in Warrington. The Ultimate Strongman federation organized the competition and gathered a bunch of England’s greatest Strongman athletes. Aside from that, they ensured that women are given the same exposure as men, so we also learned who England’s Strongest Woman is.

Paul Smith defended his title from last year by beating Andrew Flynn with a single point of advantage. He finished third without any real threat to his position, but was also unable to place higher.

Lucy Underdown marked the women’s division with a flawless performance and was crowned as England’s Strongest Woman. This was no surprise, since Lucy has been sharing incredible feats of strength very consistently for the past few months.

Event one of the 2022 England’s Strongest Man was the Farmer’s Walk For Time. The athletes had to carry implements weighing 150 kilograms, but no one was able to cover the entire distance in the time cap. Andrew Flynn carried it the furthest, so he claimed maximum points.

Paul Smith quickly took over the lead with an incredible performance in the Block Press event. He pressed all four implements in the fastest time, with Peckham trailing by just a few seconds.

The goal of the third event was to flip the massive tyre for 30 meters. The time cap for this was 75 seconds, so only two men were able to complete it.

The second-to-last event of the 2022 England’s Strongest Man was classic and self-explanatory. It was the deadlift for max and Dean Evans was the only person who was able to pull the 400 kilograms, winning the race.

It is not clear what the final event was, but here is how the rankings looked.

The women had to walk 25 meters, while carrying a 50-kilogram anvil.

The second event of the women’s division was once again the deadlift for max. Lucy Underdown holds the All-Time Strongwoman Deadlift World Record, and she was unbeatable.

The Bag Toss Medley consisted of 10 to 18-kilogram bags, in which athletes had to toss them as fast as they could in order to win.

Event four involved dumbbells in some way, but we only know that Lucy Underdown won the event and Shannon Clifford moved up to the second place.

The 2022 England’s Strongest Woman wrapped up with the Atlas Stones. The Atlas Stone set was massive, since the final implement weighed 130 kilograms.

The 2022 England’s Strongest Man & Woman contest mainly proved that Paul Smith and Lucy Underdown deserve some more respect, as they are often not included in the “Strongest In The World” debate.