Check out the five events which are set to bring entertainment at the prestigious single-day competition. 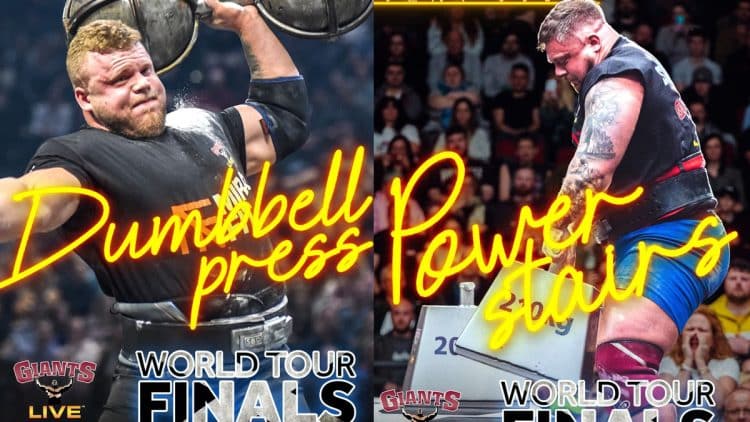 The 2022 Giants Live World Tour Final is one of the last major Strongman competitions of this season since it will take place on October 8, at the OVO Hydro venue in Glasgow. Despite it being a one-day competition, the World Tour Finals will still contain five exciting events which will determine who is the greatest Strongman out of 13 competitors.

The format of the 2022 Giants Live World Tour is quite surprising, since the competition does not feature Atlas Stones as one of the events. Nearly every Strongman competition ends with these stones, so it could make the finish of the competition even more exciting.

Although the weight of the dumbbell is still unknown, this event is standardized in Strongman competitions. So, the competitors at the 2022 Giants Live World Tour Final will attempt to complete as many reps of single-hand dumbbell overhead press as possible in the given time limit.

Oleksii Novikov is without a doubt the greatest in the world regarding this event, which is mostly due to his near perfect technique. It is hard to see anyone beating him, even with the Log Lift World Record Holder, Iron Biby, in the lineup.

Similar to the iconic Dinnie Stones, the Nicol Stones are two weirdly shaped boulders with metal ring handles attached to each one of them. The Nicol Stones also differ in weight, since one of them weighs 138 kilograms (304.2 pounds), while the other one comes out to 114 kilograms (251.3 pounds). The uneven weight and sharp handles make it extremely difficult to carry these stones for any distance.

Kevin Faires holds the Nicol Stones and Dinnie Stones Replica World Record, so it is quite obvious that he is the man to beat in the second event of the 2022 Giants Live World Tour Final.

The Axle Deadlift for reps is a well-known event in Giants Live competitions, but it never failed to display some interesting feats of strength. The weight of the deadlift will be 360 kilograms (793.7 pounds), but the axle barbell will make that even harder.

There are a number of impressive deadlifters at the 2022 Giants Live World Tour Final, but a few stand out. Oleksii Novikov recently set a new Hummer Tire Deadlift World Record at the 2022 Shaw Classic, so he cannot be left out. Graham Hicks is also one to mention, as he can very comfortably pull 1,000 pounds (453.6 kilograms) on a standard deadlift.

The competitors will have to move as quickly as possible while carrying a massive anchor, dragging a heavy chain immediately afterward.

Many factors go into this event, since the athletes have to be quick, focused, and transition fast. So, it could be anyone’s event to win, but athletes like Oleksii Novikov and Evan Singleton do possess some insane speed.

Ever since their comeback at the 2022 World’s Strongest Man, the Power Stairs gained some popularity amongst the organizers of Strongman competitions. It is not currently clear how many implements and steps will be set for the 2022 Giants Live World Tour Final, but it will make for an exciting finish regardless.

The Power Stairs definitely favor those who possess greater height, so this could result in some surprising last-minute ranking changes.

Luke Stoltman won this competition last year, which means that the pressure will be on him to defend it now. However, the lineup is even more stacked this year, so a very tough task awaits him.