Rhianon Lovelace added another incredible feat of strength with a massive atlas stone one motion. 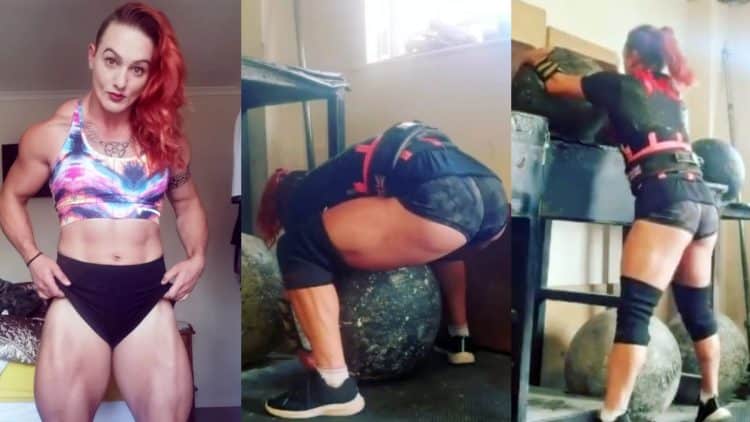 Strongwoman Rhianon Lovelace is widely regarded as one of the best athletes in the sport. Her accomplishments are nothing short of phenomenal. In a recent video posted on Instagram, Lovelace performed insane Atlas Stone One-Motion weighing almost twice her bodyweight.

Rhianon Lovelace has been pushing the boundaries since the early days of her career. Lovelace first made headlines after she won the log and deadlift event in the open division of the inaugural Arnold Strongwoman UK Log and Deadlift Championships in Oct. 2021. She performed 11 reps of 154.3 pounds (70 kg) on the overhead log press and 13 reps of 396.8 pounds (180 kg) deadlift.

Considered to be one of the best Strongwomen in history and holding the crown of pound-for-pound greatest Strongwoman according to Eddie Hall’s challenge, Rhianon Lovelace went on to set a new Axle Deadlift World Record of 515 pounds (233.5 kg) in the lightweight division at the 2022 Clash of the 64’s. She dominated her way to winning the show by performing a 495-pound (224.5 kg) deadlift. However, she did not stop there and added another 20 pounds to break the world record using only a lifting belt and a pair of lifting straps. Given her competitive weight of 141 pounds (64 kg) at the 2022 Clash of the 64’s, she managed to deadlift an incredible 3.6x her body weight.

Following her record-breaking performance in May, Lovelace returned to powerlifting just a week later and added another feather to her cap by setting the British Deadlift Record of 530 pounds (241 kg) at the 2022 BPU Single Lift British Champions, the Alan Collins Cup & The Bomb Squad. She was able to break the previous record of 507.1 pounds (230 kg) on her second try but continued to set a new one.

In a recent video uploaded to her Instagram, Lovelace shared her new feat of strength, performing a massive Atlas Stone one-motion just under two times her body weight.

Just Short of Double Bodyweight!
Will nail that before too long”

Strongwoman and Strongman contests are not complete without the Atlas Stones, a classic event that presents a unique challenge for both competitors. There is no doubt that Atlas Stones are one of the most popular closing events in tournaments, as they can be also used to announce the final winner in many competitions.

Atlas Stones are often seen as a singular movement by people not involved in Strongman, but to gain the edge in competition, it’s crucial to utilize the “one motion” technique.

In the Atlas Stone series, competitive strongmen usually use one motion to gain an advantage over their opponents. It is judged according to how many stones are loaded or how long it takes to complete the series.

Rhianon Lovelace can be seen performing the lift using a lifting belt, Atlas Stone sleeves, and a grip top. She appeared to do it with ease maintaining a fluid technique throughout and did not look exhausted after completing a solid rep.

Lovelace had recently recorded the heaviest deadlift of her career in preparation for the 2022 Berkshire’s Strongest in July. While she did not participate in the entire contest, Lovelace set another World Record by performing a deadlift of 622.8 pounds (282.5 kg), cruising past the previous deadlift World record by a comfortable 22 pounds (10 kg) margin.

Her next competition will take place on September 23-25, 2022, in Birmingham, United Kingdom, at the 2022 Arnold Sports Festival UK. The elite strongwoman might be in for a memorable performance based on the high standards she has set for herself.

Powerlifter Hunter Henderson is widely renowned for her impressive strength. It is rare for an athlete to possess such a...