Well, well, well looks like we’ve got a situation on our hands!

I take every occasion I can get to write about the wonderful cesspool that is the Instagram fitness industry so I will spare you the rant this one time. The industry is very unregulated and everyone can be a personal trainer or a “record-breaking” lifter. Basically, if you are creative enough, look good on camera and have some muscle on you- social media sensation is the dream job you have been waiting for.

Miss Ali is a Jordanian American(though this website claims she’s of Pakistani birth) born, Instagram hot chick that likes to lift heavy stuff. Back in 2016, she starred in an Egyptian movie called “Withered Green”. I, myself, have not seen the movie but imdb.com claims she’s the main actress of the movie. So if you are an Egyptian cinema enthusiast, check it out and lemmekno’ how her acting chops hold up.

Moving on, there’s not much info on her origin except a couple of interviews she gave, such as this one for emirateswomen.com. There she tells the classic tale of a bullied girl who switched her life around when she started lifting weights and is now a fitness freak who coaches other people and holds her own business(EvolveNation). She often exhibits her strength in cool social media posts such as the one you are about to watch.

I was a little skeptical at first, when Evolve Nation (who's 2 inches shorter than me) wanted to base me on this challenge. I'd only ever seen it with a very small person climbing around a much bigger person. But I'm always game for a challenge, and my new friend turned out to be an amazing base! Good game, Heba! and thanks for coaching us, Jen!

Cool stuff, right? Her most famous fitness accomplishment is the 450lbs wall sit and it’s even more impressive follow-up, the 900lbs wall sit. As you may have noticed, all the videos showing her lifts are unavailable or hidden. The reason behind pretty much every video of her fitness stuns being hidden is directly related to the next person I will now introduce.

Kenny is a popular Youtuber and fitness persona, who makes reaction videos of -you’ve guessed it-various fitness related subjects. He is mostly famous for being one of the many, many, many people that called out Brad Castleberry for using fake plates in his videos.

Kenny’s “put up or shut up” attitude caught the attention of miss Heba Ali after he posted a video dissecting her 900lbs wall sit video. In the video, he presented his evidence as to why he thinks the wall sit is either entirely or partially based on fake plates.

After posting the video he went to the comment section and called out miss Ali to prove that her amazing feat of endurance and strength is real. The fit female decided to pick him up on his offer to prove her wall sit video is as legit as legit gets. 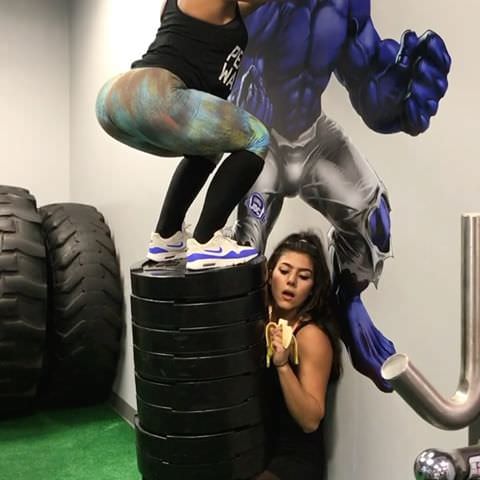 This is where things get interesting. Miss Ali showed up with her Evolve Nation posse and angrily talked to Kenny KO while her crew prepared the plates(Heba added two more, making it nearly a 1000 lbs wall sit) for the lift. She then went into a wall sit position as the two members of her crew started stacking up the 45 lbs plates on her lap. Very quickly you see that even though Miss Ali is capable of holding the ever-increasing weight, she isn’t as relaxed or comfortable with it as in her original video.  Soon enough, a slight grimace starts appearing on the face of Miss Heba Ali and she quickly loses the strength in her legs and collapses from her wall sit. Sheer dumb luck prevented her from ending up with a life-altering accident in the vein of the infamous Jean-Pierre Fux squat photoshoot accident.

A blurred teammate of Heba Ali(rumored to be the famed Tony Sentmanat aka Realworldtactical) nearly automatically went over and said: “fix it, do it again…fix it, do it again”. And too much of Kenny KO’s shock and horror, she actually went for a second try. This time the real-life Wonder Woman, made it to 20 plates before losing her balance and strength and collapsing again. Thankfully this time her crew reacted quickly and managed to grab a hold of some plates as she was collapsing. The blurred teammate is then seen furiously arguing with Kenny about supposedly losing money over Heba Ali’s, kinda-sorta- but not really, successful 900 lbs wall sit. After the video got published and the backlash arrived, Heba Ali’s account was deactivated for a short period then it was reactivated but this time it was put on private.

So…what do you think? Did Heba Ali fake the wall sit to gain internet fame and insta clicks? Personally, I think the majority of the plates in the original video are real and maybe one or two are not 45lbs plates. That or the entire stunt is video editing Instagram magic.