The Mountain is the event’s first-ever four-time champion. Hafþór Júlíus Björnsson won his 4th Europe’s Strongest Man competition earlier this week and just little over a month after he set a deadlift world record at the 2018 Arnold Strongman Classic title.

Overall it’s been a great year for Game of Thrones’ star.

The Mountain was in full control of the entire event especially after reigning World’s Strongest Man Eddie Hall was sidelined from the full event due to a recent ankle injury.

The event in Leeds, England, concluded last week with the podium finishers are as follows:

After winning Europe’s Strongest Man, Hafthor Bjornsson follow-up with the Instagram post that shows how inhumanly strong he is:

“I only had to finish one stone to get my 4th Europe’s Strongest Man title!

I decided to walk through the stones comfortably and use it as a warm up in my preparation for World’s Strongest Man!”

Eddi Hall only competed in the ‘Max Log’ event. Many experts speculated a new record of 230kgs in the ‘Max Log’ event. While several athletes succeeded in lifting the 213kg log but no one was able to establish a new record, though Eddi Hall came somewhat close on his final attempt. He entered in the competition with heavy support around his injured ankle. Check out his last attempt of Log Lift world record 230kg (507lbs) attempt below:

Bjornsson’s successful lift at 213kg established a new Icelandic record and marks a big milestone in the lift for the strongman in his competition prime.

In the end, it was once again the Hafthor Bjornsson show in Leeds, giving The Mountain a resounding just weeks before the World’s Strongest Man contest! 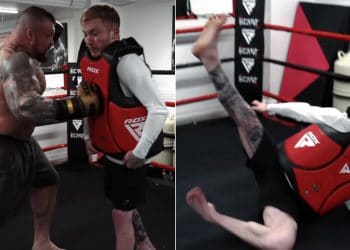