Hafthor Julius Bjornsson the World’s Strongest Man 2018, said he could easily beat up McGregor in a UFC octagon.

Back in 2015 when UFC champion Conor McGregor was gearing up to challenge Jose Aldo for the UFC 194 PPV main event, a viral video was released of the “Notorious” sparring with
“The Mountain”.

Here is the video, Bjornsson and McGregor spar:

As you might expect from the trash talker, McGregor claims to have “folded” the 6’9”, 400-pound bruiser.

But “The Mountain” has warned the Irishman that he could beat him up in 10 seconds. Hafthor told the YouTube channel Off the Ball in a video posted Monday.

“Bring me shorts and put us in a cage, and I’ll fight him again,”

When asked how many McGregors it would take to beat him, Bjornsson said:

Discussing the sparring session, Hafthor implied that he went easy on McGregor because he did not want to hurt him.

“I had him a few times, but I just didn’t want to break him. I was like, ‘Fuck this, I’m not going to run after this small guy!’ He’s running around, you know? I don’t have cardio for running around after small guys,” Bjornsson said.

“He felt really light. I had him a few times, but I just didn’t want to break him.”

“He’s quick and slippery, so it’s hard to get a grip. There were moments where I could have just messed him [up]. There’s a huge size difference between me and him, but I’m not used to getting punched. I’m no fighter; I’m wearing jeans and shoes. I just took my shirt off, and we were joking.”

McGregor, who has been charged with assault and criminal mischief, is due to appear in New York for a court hearing. The UFC promotion indicated that “Notorious” won’t receive any offers until after his June 14 court date in New York. 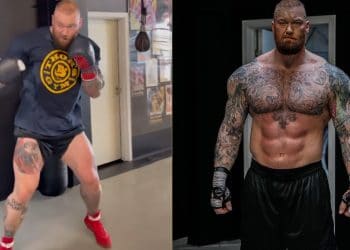 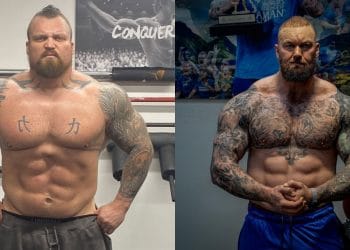