Big forearms have that same effect on as a nice set of traps, it just screams “don’t fuck with this dude”. Big forearms also tend to mean you have a strong grip which always comes in handy. Be it opening a pesky jar of peanut butter, having a firm handshake during a business meeting or being great at arm wrestling. So today we will look at some exercises you can do to increase your forearms size and create that boa constrictor-like vice grip. 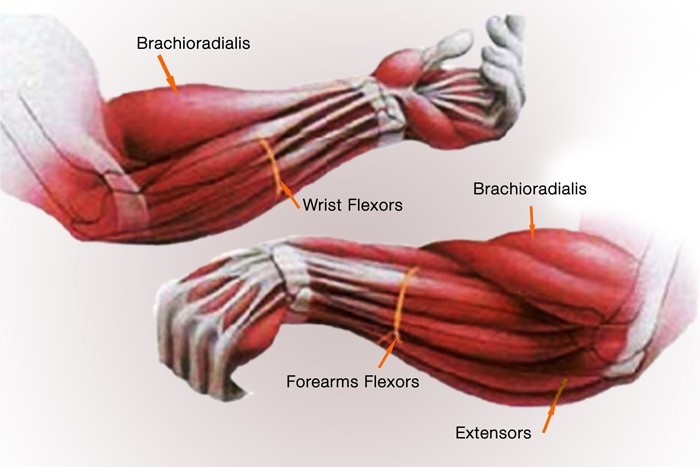 Before I get started I would like to point out that I am fully aware that big forearms do not necessarily equal to awesome grip strength. Just take a look at professional rock climbers, they all look like Bruce Lee and can balance their entire body weight with just a few fingers o a single hand. As such I will focus solely on getting some forearm size and grip strength is basically going to be an afterthought.

First off let’s cover some forearms training basics, working with just your body.

This is some very basic stuff you can do for reps which will work your forearms. Sit on all fours like you are about to go into a push-up position, then start lifting palms upwards. The more weight you shift on your upper body the harder it will get, with the hardest variation being doing it from a full push-up position.

Another basic exercise you can basically do at any time of the day, not just in the gym. Form a fist and start rotating your wrist. It’s a good warmup exercise for your wrists and forearms but if you do it often enough it will for sure result in some forearms gains.

You can do this standing and sitting, each version has its own pros and cons. Standing variation, you can load up the barbell with more weight but the range of motion get sacrificed. On the other hand, the sitting variation engages your forearms better, you get a better range of motion but you can forget about doing anything heavy or else you will injure yourself.

This isn’t anything revolutionary or forearm specific but performing pull-ups does require grip strength and works your forearms. Try utilizing pull up bar hangs for time and slooowww pull-ups. That will put an extra strain on your forearms and give you a sick pump. Also, try incorporating towel assited pull-ups. They are very difficult to perform but maaan that will turn your forearms into Popeye in no time.

Another one of those regular exercises that aren’t specifically for your forearms, but will put mass and strength on your entire upper body. With deadlifts, use a standard double overhand grip with a weight you can grind out about ten times. Keep the tension in your arms constant throughout the entire set and for extra hard mode forearm gainz, utilize a fat gripz(if you have one) add-ons.

So, farmers walk…an absolute classic. It works your core, your forearms, your grip, and your traps. Pick up some heavy-ass dumbbells and start walking forwards then back toward your starting position with the weights in your arms. The longer the distance, the greater the gainz. Pro tip: keep your back straight, shoulder blades locked in, your core tight and walk with small fast steps.

Adding a fat grip add-on to any pulling based exercise will make your forearms beg for mercy. Hammer curls are great for your biceps, however, they also work your forearms as well. Play around a bit with your grip, try squeezing the dumbbell as hard as can whole curling the weight up, or maybe try doing a thumbless grip.

Ronnie Coleman: "I Might Never Walk Again" After Spending $2 Million On The Last 3 Surgeries

Conor Mcgregor Dissect Round By Round Loss To Khabib, Says No Problem If There's No Immediate Rematch