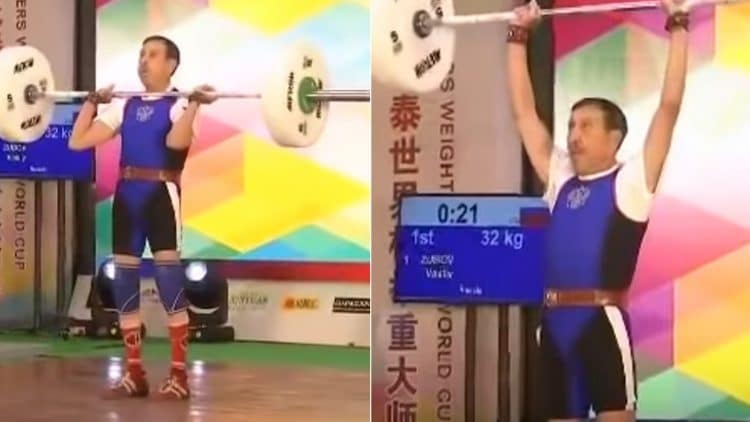 In case you don’t know what benefits you can get by competing in strength sports moreover in weightlifting you’ll never waste a day. Take a look at this inspiring 87-year-old weightlifter Vasily Zubov who started lifting at the age of 12 and his most recent performance was legendary for several reasons.

Vasily Zubov, a Russian weightlifter, was the oldest competitor who competed at the Masters World Cup this past Friday. He’s a multi-sport athlete had participated in more than 40 times on a national stage and still doing it.

A youtube user by the name of wlift84 has uploaded a video that shows an 87-year-old Vasily Zubov putting on an impressive performance at the Weightlifting Masters World Cup.

“With orange weightlifting shoes and blue Russian national team singlet, Mr. Zubov, 87 years of age, was participating in a weightlifting competition. He was the oldest contestant of the Masters World Cup this year. Mr. Zubov started weightlifting at the age of 12, has competed 43 times in national meets, 11 times in European Championships, and 8 times in World Championships. He was decorated with 9 Silver and 3 Bronze medals. He exercises regularly, and enjoys not only weightlifting, but also track-and-field, swimming, and shooting.”

Zubov ended with a 26kg make for the snatch, and in the clean & jerk, he finished with 32kg, which makes him winning in his weight class.

This story is such an inspiration for all of us that age shouldn’t conclude the end of life.