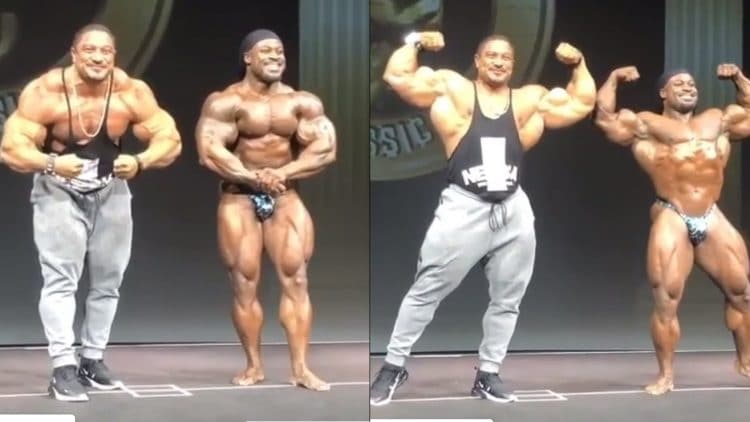 William Bonac is a Ghanian sponsored athlete. He is also one of the best African-born bodybuilders of all time. He earned many titles in his career, but on September 15th, he had the biggest success – 4th place at Mr. Olympia 2018. During this year, he was the winner of the Arnold Sports Festival. Also, he earned the second place at IFBB Arnold Classic Australia.

Roelly Winklaar is a Curacao-born bodybuilder known for brutal “delt-demolition routine”. He won the 3rd place at 2018, Mr. Olympia. Only superstars Shawn Roden and Phil Heath were better. “Dutch Beast” constantly improves his results – he was 12nd, 7th, and 6th two times at the same event earlier. In 2018, he was placed first at IFBB Arnold Classic Australia and Prague Pro.

Bonac Classic was held on November 17th in Theater Amsterdam, Netherlands. Roelly Winklaar surprised the fans. He appeared on the stage side to side with his “angry rival” William Bonac on a guest posing session! The crowd was yelling and applauding, so amazing! Two open bodybuilding legends stood next to each other!

Have you ever seen 3rd and 4th placed in Mr. Olympia side by side? Well, it is always a spectacular thing to watch. Look how these two muscle mountains show off their dimensions. The video below speaks more than a million words! Fans live for moments like this one! Despite they are rivals, they look so friendly. Another great day in the world of bodybuilding!

It looks like bodybuilding builds friendships! Roelly Winklaar made the fans day. What are your thoughts on this? Did you enjoy looking two muscle mountains next to each other?

Look What Strongman Brian Shaw Does To Frying Pans!