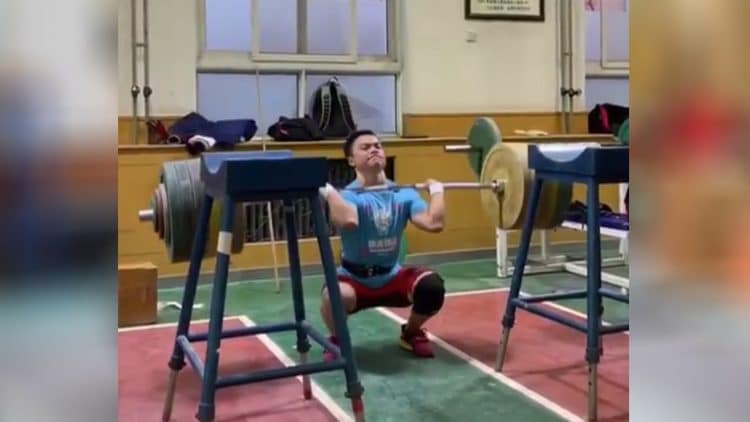 That is super impressive!

Whoa! That’s a lot of weight for any lifter, much less someone who weighs 55kg/121 lbs completing a 197kg/434 lbs squat which is what Chinese weightlifter Tao Wenli did. A video was posted on Instagram by Lawrence (@larrior).

Watch the lift below:

It’s seldom we’ll see a lifter perform a similar feat because it’s such a difficult thing to do. You really have to have it all together to accomplish a front squat multiple times your bodyweight. Now, Wenli doesn’t really have videos of recent lifts showcasing his incredible strength. Heck, we don’t even know where he stands at a national level.

But one thing is for sure and that is he has a lot of potential because honestly you’ll have to look very hard… and maybe, you’ll find someone who is able to put up such big numbers on the front squat.

However, there is one man who has performed a possibly more impressive front squat and his name is Ivan Ivanov from Bulgaria. Now you’re going to see the video in a second but first, you must know that he completed a 210kg/463 lbs front squat in the 56kg weight class.

It’s important to note that in the video he may have weighed slightly more but it was around a 3.75x bodyweight squat which is just not human.

Here’s the freakish feat of strength:

Will Tao Wenli surpass this monstrous front squat performance? Well, if he keeps training, we could very well see the “impossible” become possible!