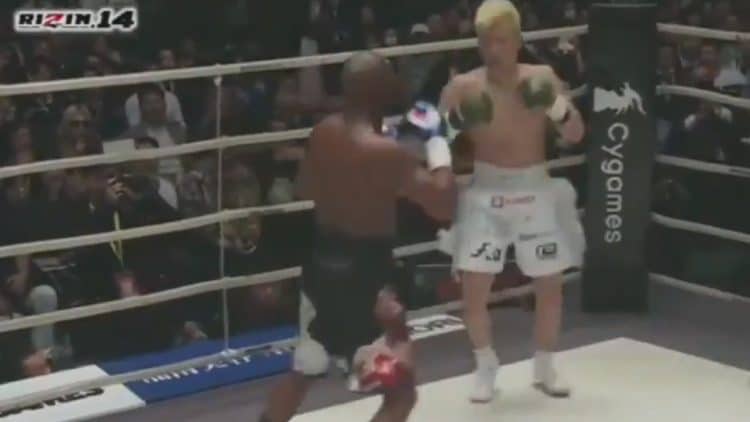 Undefeated Floyd Mayweather stopped a 20-year-old Japanese kickboxer Tenshin Nasukawa in the first round of their welterweight boxing exhibition on New Year’s Eve from inside the hallowed Saitama Super Arena in Tokyo, Japan at Rizin 14.

The match was scheduled to be three rounds with three minutes in each round under boxing rules. Mayweather was reportedly paid a $9 million for his efforts. Boxing champion displayed a much more aggressive fighting style than we’ve seen in his past fights.

Towering over Nasukawa, who has fought in the past at 121 pounds the 41-year-old former five-division world champion Floyd Mayweather made his foe look foolish as he floored Nasukawa three times in the first round. That forced Nasukawa’s corner to threw in the towel before making it to three minutes of action.

After scoring a first-round knockout win over Japanese kickboxer Tensin Nasukawa in a bizarre exhibition match, Mayweather claims he’s still retired and teasing a fight against the likes of Khabib Nurmagomedov and other mixed martial artists.

Check out the video highlights below:

Floyd Mayweather just got paid millions of dollars to destroy Tenshin in less than a round. The greatest businessman in history. #Rizin14 pic.twitter.com/a5rzupGaJq

Dropping him several times in the 1st Round with Tenshins corner then throwing the towel in! #RIZINFF #RIZIN14 🇯🇵
📺- Live now on @FiteTV 🌍 pic.twitter.com/m9dDX34BaJ

Bodyguard Gregory La Rosa, was treated at an Atlanta hospital for a leg wound and released. Floyd Mayweather's bodyguard is...

Conor McGregor: Mayweather Is ‘Out’ Of MMA Fight Negotiations ‘I’m Proud of You Son.’

If UFC champion Conor McGregor is to be believed, there will be no more talk of Floyd Mayweather fighting in...