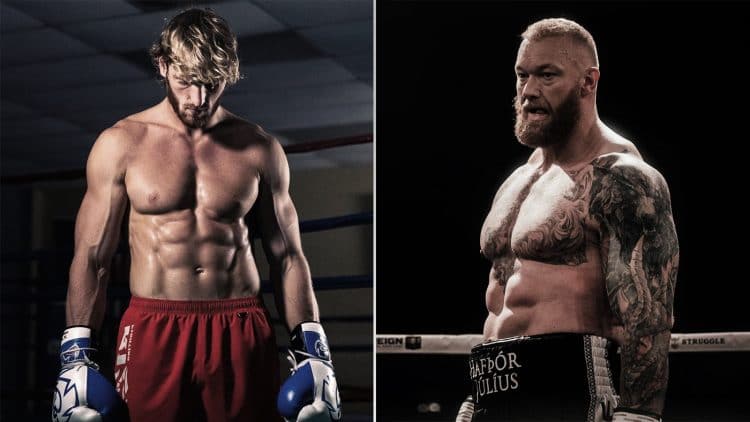 Logan Paul welcomed a special guest, former strongman turned professional boxer Hafthor Bjornsson, on his Impaulsive podcast on September 23. The Paul brothers have created a storm in the combat sports community by calling out professional fighters in recent times. A similar but playful interaction happened between Paul and Bjornsson on the podcast.

Strongman Hafthor Bjornsson became a household name for his portrayal of Gregor Clegane aka The Mountain in Game of Thrones. After two exhibition boxing bouts, Bjornsson recently turned pro. He won his boxing debut against Devon Larratt via a first-round knockout on September 18 in Dubai.

A YouTuber-turned-professional boxer, Logan Paul is coming off a loss to Floyd Mayweather in his last fight. Holding a 0-2 record, the elder Paul sibling is yet to taste victory in his budding boxing career. With an unblemished 50-0 record, Floyd Mayweather is one of the greatest boxers of all time. However, Paul exceeded the expectations and did not allow Mayweather to walk away with a finish.

“You should challenge me next”: Hafthor Bjornsson

Impressed by the performance in the Mayweather fight, Hafthor Bjornsson lauded Logan Paul for making it to the final bell. However, a brutally honest Bjornsson pointed out that Logan Paul (6ft-1in, ~190lbs) had a significant size and reach advantage over Floyd Mayweather (5ft-1in, 155lbs). The Mountain went on to suggest that Paul should fight Bjornsson himself – hinting that Paul should test his mettle against bigger guys.

“You should challenge me next. I’m heavier now, I’m taller.” Hafthor Bjornsson said.

Just as Logan Paul started wondering who had proposed that fight earlier, the podcast’s co-host Mike Majlak threw in an intriguing question: ‘Who wins that fight?’ Paul wasted no time and jokingly suggested to Bjornsson that they should stand up and start fighting right there in the studio. The Mountain’s reply to the proposition left everyone laughing hysterically.

Logan Paul went on to highlight the power discrepancy between him and Hafthor Bjornsson, who in his last fight weighed in at 321lbs and made quick work of a sizeable opponent.

“The thing is, if you crack me once bro, I’ve seen your sparring videos, your training videos, if you hit me with one punch, I don’t know if I’d be on this planet.” Logan Paul said

While admitting that the fight between him and Logan Paul would not be a fair contest considering the size and power discrepancy, Thor stated that sparring with Logan Paul would be an honor. The trio went on to discuss Bjornsson’s famous sparring session with former UFC champion Conor McGregor.

Hafthor Bjornsson was expected to make his professional boxing debut against fellow strongman and 2017 WSM Eddie Hall. However, a bicep tear suffered during a training session forced Hall out of the fight. Arm wrestling ace Davon Larratt offered to step in for Hall and ended up fighting Bjornsson instead.

Eddie Hall and Hafthor Bjornsson are expected to fight in early 2022 after Eddie Hall fully recovers from the bicep surgery. Mike Majlak brought up Hall in the conversation and jokingly asked Bjornsson if he knows who Eddie Hall is. Not the one to let go of an opportunity to promote the fight, Hafthor Bjornsson said:

“Oh, that’s the fat guy from the UK right? Yeah, I remember that guy, yeah!”

After pondering over whether Eddie Hall’s bicep injury was a legitimate one or just an excuse to delay the fight, Hafthor Bjornsson took another jab at his archrival for ‘fooling around, punching celebrities around’. Bjornsson was making a reference to a sparring video on Eddie Hall’s YouTube channel. Hall punched rapper Peter Andre, who could barely handle the power shots to the body despite being fully geared.

Hafthor Bjornsson has repeatedly stated that he is ‘in it to win it’, implying that he intends to box for a long time. Thor wants to cap his boxing journey with a win over Eddie Hall. He asserted that the more the fight gets delayed, the harder it will be for Eddie Hall to hang in there against him.

“He’s actually doing me a favor by fooling around, playing around and not taking it seriously. Because now I can just keep working hard, prepare myself. Whenever he’s ready, I’ll be even better ad I’ll b able to kick his a*.” Hafthor Bjornsson said.

Logan Paul and even his brother Jake have achieved a lot of success despite being in their mid-twenties.  Hafthor Bjronsson admired Paul for being a young achiever. However, Paul quickly admitted to his shortcomings and said that he looks for instant gratification over long-term goals.

“I’ve never had that patience to look at my goal far down the line. I want everything now. I want to be the best right now. I’m like a product of my generation. Instant gratification is unfortunately something that I yearn.” Logan Paul stated.

Being able to compete in WSM takes years, if not decades of patient training and hard work. Logan Paul hypothesized that Hafthor Bjornsson could make strides in boxing training because of his work ethic during his days as a strongman.

Eddie Hall and Hafthor Bjornsson are expected to fight in March 2022. Both men have every incentive in the world to show up in their best shape for the fight. How do you think the fight plays out? Let us know in the comments!