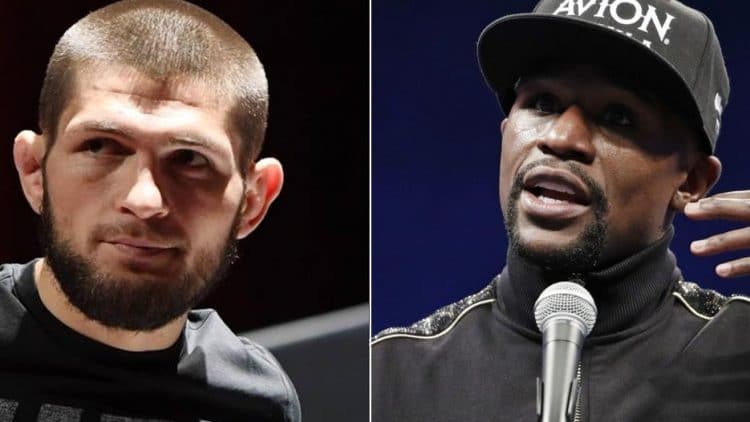 Floyd Mayweather was recently called out by UFC lightweight champion Khabib Nurmagomedov on the heels of UFC 229 win over Conor Mcgregor and Mayweather who’s more than ready to throw down with ‘Eagle’ in the boxing ring.

Many fans and pundits doubt that a fight between Mayweather and Khbaib will never happen, though latter who recently caught up with TMZ, saying the fight is happening. ‘Money’ also said he’d make guaranteed bigger payday than the one he receives in ‘Money’ vs. Conor Mcgregor boxing spectacle back in 2017.

“Oh, we’re fighting,” Mayweather told TMZ (via MMAjunkie). “I’m my own boss. I can’t say what’s going on on Khabib’s end, but on my end, we can make it happen.

“… When I face Khabib, I’m getting a nine-figure payday. It’s more than the McGregor fight – probably $100 million more, guaranteed. It could be somewhere between $110 [million] and $200 million guaranteed.”

Last year in August, Mayweather came out of retirement to fight Conor McGregor in a highly publicized boxing spectacle. Mcgregor hung tough in his boxing debut but in the end, Mayweather won via TKO in the 10th round. Both fighters banked millions. The result pushed Mayweather’s perfect record to 50-0, and immediately afterward he retired. That doesn’t seem to be the case as ‘Money’ not only implying to this bout but also a rematch with former rival Manny Pacquiao as well.

Nurmagomedov who after the win extended his win streak to 27-0. It seems both fighters appear to be interested in fighting each other but finding a location could be a problem as ‘Eagle’ doesn’t want the fight in Las Vegas, but Mayweather has some other plans.

Before any of that happen Khabib who’s currently on temporary suspension that Nedava State Athletic Commision handed to him as a punishment for causing post-fight brawl as well holding out his fight purse of $ 2-million pending further investigation.

Do you think a showdown between Mayweather and Khabib will happen?