Brian gives an update on his Arnold Classic injury. 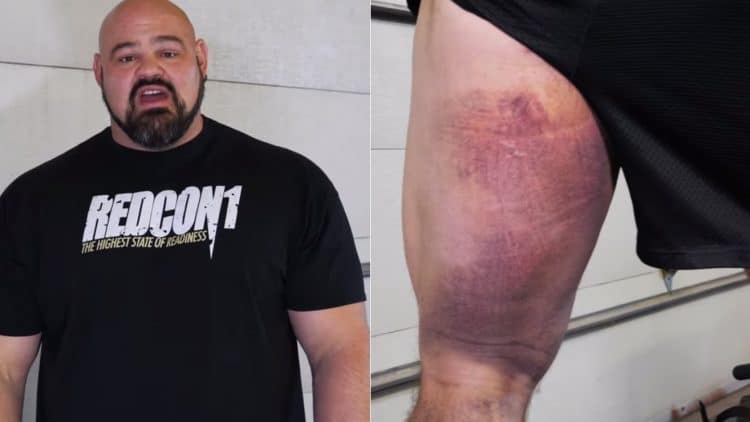 The four-time World’s Strongest Man and three-time Arnold Classic champion recently injured his hamstring pretty good after attempting a World-Record deadlift. But to keep his fans up to date on his injury and recovery, Shaw revealed what his bruise hamstring looks like pretty severe and even spread down to his calf.

Shaw hasn’t placed lower than 2nd in six years at the Arnold Strongman Classic but his mishap put him at an eighth-place finish in 2019.

So, Brian Shawn took us through a day of recovery exercises where began on a rowing machine to get the blood flowing to his injured muscle which he says should force blood to the area to “flush out some of the crap and bruising” in the area.

He then followed his rowing session with some ARP wave treatment which involves electrical current to speed up muscle recovery. He describes the treatment as being “nuts” with lots of involuntary movements and just a crazy feeling due to the electrical shockwaves through his legs.

He’s now recovering and you can watch his video below…

Shaw was optimistic that his first ARP treatment would work wonders but instead was a little disappointed that it didn’t quite meet his expectations. However, he explained that he understands healing takes time.

“I was definitely optimistic after yesterday and I feel like there was some improvement but definitely not as much as I hope. It’s going to take a lot of time even with the best treatment, Healing still has to happen”. He has used ARP before and says it was second to none as far as recovery goes.

Shaw went through another ARP session the next day still remained optimistic that it will help him to recover a lot faster in combination with his other recovery exercises.

Brian Shaw explains his injury as very disappointing and how he’s felt down not being to train like he usually does but he’s on his way to getting back to 100% and things are looking up for his future.

Here Are The CrossFit Athletes Leading The 2019 Open Workouts