380lbs Eddie Hall Does A Backflip !

WSM winner tries his luck with some gymnastics 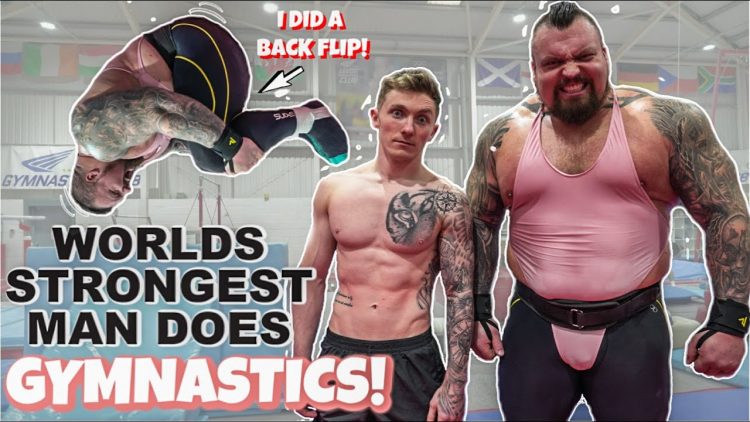 It seems, almost on a weekly basis Eddie is a part of some wacky “social experiment-ish” youtube video.  Last week, he switched his 10k kcal diet for a day with a modest 3k kcal diet. This week, he teamed up with a British Olympic bronze medal gymnast, Nile Wilson and tried his luck with pulling off a backflip.

Record-setting, record-breaking, World’s Strongest Man winner and YouTuber extraordinaire, Eddie Hall is at it again. As mentioned in the brief introduction above, this time Eddie is doing backflips.  He went to a gymnastics gym in Leeds and teamed up with a former Olympian and current YouTuber, Niel WIlson. The end result of their collaboration was to make Eddie Hall be able to perform a backflip before the end of their video.

As soon as Eddie finds out the goal of him coming to a gymnast gym a giant “nope, not happening…not today, not ever” expression encompasses Eddie Hall’s face. However, Eddie is always up for a challenge, so he slips into a very small and very…well, feminine-looking attire and arms himself with 400lbs worth of confidence.

Before Eddie could start doing backflips like a giant ninja, firstly he has to warm up and stretch, which is a lot harder than it sounds like. First up, Eddie and Niel do some light jogging with arm circles which is probably the first time in years Eddie has done a cardio session. After that, the fun part begins-stretching. I have to admit, Eddie is actually quite limber for a near 400lbs! Despite the fact that light stretching makes him sweat like he has a gun pointed to his head, Eddie does; groin stretches, reverse worm, handstands, high jumps, distance jumps, and other backflip building exercises.

At this point, Eddie is a giant puddle of sweat just waiting for all this nonsense to end, while Niel and his gymnast buddies are just flexing on Eddie with various fancy-looking gymnast moves. Now, it’s time to practice the backflip itself.  First Eddie tries something of a standing back roll onto a thick mattress. Then, the deadlift master tries just jumping forward onto the mattress and lastly, he does a back jump into the rubber foam pit into which he will be performing his backflip.  At this moment, Eddie has gotten the basic mechanics of the backflip and his confidence is feeling pretty damn good at this point. So it’s time for the moment of truth-the actual backflip.

Two of Niel’s gymnast buddies stand at Eddie’s sides to help with the momentum of the backflip. Eddie takes a deep breath, says his “last words” in case something goes horribly wrong and away he goes.  Upon surviving the backflip and realizing he’s literally jumping into a fluff pool he goes for a second try-this time without the assistance. The 400lbs mass of muscle, tattoos, and horrible gym attire goes flying 6 feet back like a cannonball into the rubber noodle pool and Eddie gets to cross another item off his bucket list-doing a backflip.

After that, of course, Eddie Hall being Eddie Hall went and did some “human throwing” to show off the boys what he’s good at.